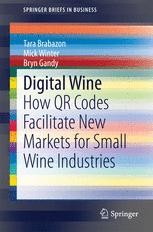 This book explores the way in which QR codes (Quick Response codes) can help the wine industry facilitate distribution and more effectively market and sell their product. It examines the interventions, invention and opportunities brought about by QR codes for the wine industry. It also investigates how QR codes can help enable regional development as well as information and knowledge about winemakers and regions. The book begins with an introduction to QR codes. It explains how to use them as well as shows how QR codes combine analogue and online promotion and information dissemination. Next, the book explores strategies and examples from the creative industries, small nation theory and emerging wine industries. It then goes on to examine how to integrate QR codes with wine media, including marketing the bottle and using QR codes to build new wine regions. The book concludes with a case study of how Aotearoa/New Zealand wine producers deploy QR codes. QR codes can store and digitally present, a range of helpful data, including URL links, geo-coordinates and text and can be scanned by smart phones, making them a useful marketing and business tool. Presenting detail research on how QR codes can enhance the relationship between producers and consumers as well as aid regional development in the wine industry, this book will be of interest to academics focusing on Wine Studies, small and medium sized enterprises (SMEs) and practitioners and researchers from the creative industries sector. In addition, while this book focuses on the wine industry, the information that it presents about QR codes is relevant and applicable for an array of industries that require a tether between analogue and digital, physical and virtual, especially food and primary production.

Tara Brabazon is the Professor of Education and Head of the School of Teacher Education at Charles Sturt University, Australia, Fellow of the Royal Society for the encouragement of Arts, Manufactures & Commerce (RSA) and Director of the Popular Culture Collective. Previously, Tara has held academic positions in the United Kingdom, Canada and New Zealand. She has won six teaching awards, including the National Teaching Award for the Humanities and has published 14 books and over 150 refereed articles and book chapters. She is best known for her books Digital Hemlock (2002), the University of Google (2007), Thinking Pop (2011) and Digital Dieting (2013).

Mick Winter is a writer and journalist. He holds a Bachelor of Arts from the University of California, Santa Barbara and a Master of Arts (Distinction) from the University of Brighton in the UK. He is currently completing his doctorate on meme culture at Charles Sturt University. A professional writer, he is the author of Cuba for the Misinformed: Facts from the Forbidden Island, Scan Me - Everybody's Guide to the Magical World of QR Codes and Peak Oil Prep: Prepare for Peak Oil, Climate Change and Economic Collapse. He is an expert in the Californian wine industry and has written guide books about the wine region in the Napa Valley. He remains an active journalist for the wine industry.

Bryn Gandy works in the public service in New Zealand. His career has included roles working across a number of areas of New Zealand life, including health, community development and Local Government, social welfare, justice and defence. Having achieved a BA (Hons) at the Victoria University of Wellington, he was a Leadership Development Centre Fellow in 2009 and studied the way community and government organisations were meeting the challenge of addressing increasingly complex problems by working together. He has an interest in how economic development can enable social development.