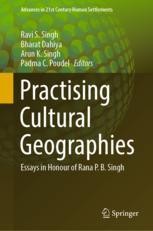 This festschrift honours Prof. Rana P.B. Singh who has dedicated his life to teaching and conducting research on cultural geography with a ‘dweller Indian perspective’. The book focuses on the cultural geographies of India, and to an extent that of South Asia. It is a rich collection of 23 essays on the themes apprised by him, covering landscapes, religion, heritage, pilgrimage and tourism, and human settlements.

(late) Ravi S. Singh (1971-2021) had earned PhD from Jai Prakash University at Chhapra (2000), and DLitt (2020) from the Banaras Hindu University (BHU) – the first and the only one in BHU history of 75 years. His employment career started in 1996 as a Lecturer in Geography at Rang-Frah College at Changlang, Arunachal Pradesh, followed by a lectureship in Kisan P.G. College Bahraich, Uttar Pradesh in 2001. Ravi had returned to his alma mater and joined as a Reader (Associate Professor) in the Department of Geography, BHU, on 29 October 2005 and was promoted to full Professor on 29 October 2011, and served there till his last breath on 21 April 2021. Of course, he was a trained social and cultural geographer, and had developed critical insights into several branches in geography and interdisciplinary discourses, which included Geographical Thought, Social and Cultural Geography, Geography Education, Peri-urban Geographies, and Qualitative Research Methods—all illustrated with his innovative research publications. Eight students earned their PhD degrees under his supervision (2013-2019). In a short span of only 25 years of his profound career, he had to his credit publishing two monographs, five edited books, and hundred research papers. Associated with many academic bodies of repute, he had been the Vice-President: Indian Society of Spatial Science, and the Secretary: The Indian Institute of Geographers.
Bharat Dahiya is a Director of Research Center for Sustainable Development and Innovation at the School of Global Studies, Thammasat University, Bangkok, Thailand. He is an Extraordinary Professor at the School of Public Leadership, Stellenbosch University, Stellenbosch, Western Cape, South Africa, and a Distinguished Professor at Urban Youth Academy, Seoul, Republic of Korea. He is also a Founding Board Member of the World Smart Cities Economic Development Commission––under the World Business Angels Investment Forum, based in Miami, USA. Trained as a Geographer and Urban-Regional Planner, he holds a PhD from the University of Cambridge, UK. Since early-1990s, he has worked on the international practice, policy analysis and applied research on sustainable urbanisation, including city planning and development strategies, sustainable human settlements development, upgrading strategies, urban poverty, urban environment and resilience, cultural heritage and landscapes, community-led development, and urban governance. Working with international development banks and United Nations agencies, such as the World Bank, and UN-Habitat, he initiated, led, managed and/or contributed to policy advice, technical assistance, and operational projects on sustainable development in a number of countries in around the world. Whilst at the World Bank, Bharat co-authored a book, Urban Environment and Infrastructure: Toward Livable Cities (2004). At UN-Habitat, he conceptualised and coordinated United Nations’ first-ever report on The State of Asian Cities 2010/11 (2010; published in Chinese language in 2014). More recently, he co-authored Partnering for Sustainable Development: Guidelines for Multi–stakeholder Partnerships to Implement the 2030 Agenda in Asia and the Pacific (UNU-IAS, and UN-ESCAP, 2018), and co-edited New Urban Agenda for Asia-Pacific: Governance for Sustainable and Inclusive Cities (Springer, 2020). Bharat has held academic positions in Australia, Indonesia, South Africa, and Thailand.

Arun K. Singh obtained his PhD from Indore. He joined Higher Education Department of Madhya Pradesh in September 1993 as Assistant Professor of Geography and served as teaching faculty (2002-2007) in Madhya Pradesh Academy of Administration and Management, Bhopal, joined BHU as Associate Professor in June 2007. Since June 2010, he is Professor of Geography and Coordinator of the proposed postgraduate course on Urban and Regional Studies under the IoE scheme. He has published three edited books and more than 50 research papers in national/international journals and chapters in edited books. His area of interest includes Urban Studies, Population Geography, Participatory Planning and Governance. He was editor of a journal Governance published by HUDCO Chair, Academy of Administration and Management, Bhopal. He has completed three projects sponsored by the HUDCO-HSMI, UNDP and DfID in Academy of Administration, Bhopal and one major research project on water supply and sanitation funded by University Grants Commission, New Delhi.

Padma Chandra Poudel is an Emeritus Professor of Geography of Tribhuvan University (TU), Nepal with PhD from Banaras Hindu University, India. His field of interest and specialization are tourism, environment, and planning. He worked at different international and national organizations in different capacities and is credited as Service Commission Member of Pokhara University; Head of Central Department of Geography, TU; Member of PhD Research Committee of Faculty of Humanities and Social Sciences, TU; Senate member of TU; Chairman of urban area determination commission of Nepal Government; Senior advisor of International Labour Organization (ILO); Advisor of Nepal Tourism Board. Prof. Poudel also served as General Secretary of Nepal Geographical Society for nearly two decades. Presently, he is Chairman of Geography Subject at Curriculum Development Centre of the Ministry of Education and Culture, Government of Nepal. He has published dozens of research articles in reputed international and national journals.