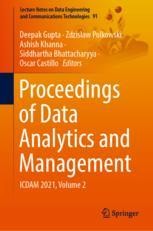 Proceedings of Data Analytics and Management

This book includes original unpublished contributions presented at the International Conference on Data Analytics and Management (ICDAM 2021), held at Jan Wyzykowski University, Poland, during June 2021. The book covers the topics in data analytics, data management, big data, computational intelligence, and communication networks. The book presents innovative work by leading academics, researchers, and experts from industry which is useful for young researchers and students.

Dr. Deepak Gupta received a B.Tech. degree in 2006 from the Guru Gobind Singh Indraprastha University, India. He received M.E. degree in 2010 from Delhi Technological University, India and Ph. D. degree in 2017 from Dr. APJ Abdul Kalam Technical University, India. He has completed his Post-Doc from Inatel, Brazil. With 13 years of rich expertise in teaching and two years in the industry; he focuses on rational and practical learning. He has contributed massive literature in the fields of Intelligent Data Analysis, BioMedical Engineering, Artificial Intelligence, and Soft Computing. He has served as Editor-in-Chief, Guest Editor, Associate Editor in SCI and various other reputed journals (IEEE, Elsevier, Springer, & Wiley). He has actively been an organizing end of various reputed International conferences. He has authored/edited 43 books with National/International level publishers (IEEE, Elsevier, Springer, Wiley, Katson). He has published 162 scientific research publications in reputed International Journals and Conferences including 83 SCI Indexed Journals of IEEE, Elsevier, Springer, Wiley and many more.

Dr. Zdzislaw Polkowski is an Adjunct Professor at Faculty of Technical Sciences at the Jan Wyzykowski University, Poland. He is also the Rector's Representative for International Cooperation and Erasmus Programme and former dean of the Technical Sciences Faculty during the period of 2009–2012 His area of research includes  Management Information Systems, Business informatics, IT in business and administration, IT security, Small Medium Enterprises, CC, IoT, Big Data, Business Intelligence, and Block chain. He has published around 60 research articles. He has served the research community in the capacity of author, professor, reviewer, keynote speaker, and co-editor. He has attended several international conferences in the various parts of the world.  He is also playing the role principal investigator.

Dr. Ashish Khanna has expertise in Teaching, Entrepreneurship, and Research & Development of 16 years. He received his Ph.D. degree from National Institute of Technology, Kurukshetra in March 2017. He has completed his M. Tech. and B. Tech. from GGSIPU, Delhi. He has completed his PDF from Internet of Things Lab at Inatel, Brazil. He has around 100 research papers along with book chapters including more than 40 papers in SCI indexed Journals with cumulative impact factor of above 100 to his credit. Additionally, He has authored, edited and editing 19 books. Furthermore, he has served the research field as a Keynote Speaker/Session Chair/Reviewer/TPC member/ Guest Editor and many more positions in various conferences and journals. His research interest includes image processing, Distributed Systems and its variants, and Machine learning. He is currently working at the CSE, Maharaja Agrasen Institute of Technology, Delhi. He is convener and organizer of ICICC Springer conference series.

Dr. Siddhartha Bhattacharyya [FRSA, FIET (UK), FIEI, FIETE, LFOSI, SMIEEE, SMACM, SMIETI, LMCSI, LMISTE] is currently the Principal of Rajnagar Mahavidyalaya, Birbhum, India. Prior to this, he was a Professor at CHRIST (Deemed to be University), Bangalore, India. He also served as the Principal of RCC Institute of Information Technology, Kolkata, India. He has served VSB Technical University of Ostrava, Czech Republic as a Senior Research Scientist. He is the recipient of several coveted national and international awards. He received the Honorary Doctorate Award (D. Litt.) from The University of South America and the SEARCC International Digital Award ICT Educator of the Year in 2017. He was appointed as the ACM Distinguished Speaker for the tenure 2018-2020. He has been appointed as the IEEE Computer Society Distinguished Visitor for the tenure 2021-2023. He is a co-author of 6 books and the co-editor of 75 books and has more than 300 research publications in international journals and conference proceedings to his credit.

Oscar Castillo holds the Doctor in Science degree (Doctor Habilitatus) in Computer Science from the Polish Academy of Sciences (with the Dissertation “Soft Computing and Fractal Theory for Intelligent Manufacturing”). He is a Professor of Computer Science in the Graduate Division, Tijuana Institute of Technology, Tijuana, Mexico. Currently, he is President of HAFSA (Hispanic American Fuzzy Systems Association) and Past President of IFSA (International Fuzzy Systems Association). Prof. Castillo is also Chair of the Mexican Chapter of the Computational Intelligence Society (IEEE). His research interests are in Type-2 Fuzzy Logic, Fuzzy Control, Neuro-Fuzzy and Genetic-Fuzzy hybrid approaches. He has published over 300 journal papers, 10 authored books, 40 edited books, 200 papers in conference proceedings, and more than 300 chapters in edited books, in total 865 publications according to Scopus (H index=60), and more than 1000 publications according to Research Gate (H index=72 in Google Scholar).