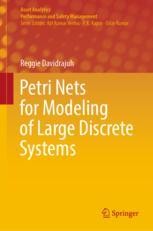 This book offers a new Modular Petri Net as a solution to the vast Petri net models. It presents some approaches centering around modules (known as “Petri modules”). The goal of this book is to introduce a methodology in which Petri nets are moved to a new level. In this new level, large Petri net models are made of Petri modules, which are independent and run on different computers. This book also contains the literature study on modular Petri nets and definitions for the newer Petri modules. Also, algorithms for extracting Petri modules, and algorithms for connecting Petri modules, and applications are given in this book. Besides, the ideas and algorithms given in this book are implemented in the software General-purpose Petri Net Simulator (GPenSIM). Hence, with the use of this book the readers/users would be able to know that real-life discrete event systems could be modeled, analyzed, and performance-optimized with GPenSIM.

Dr. Davidrajuh is an editor of the journal "International Journal of Business and Systems Research". Also, he serves on the editorial committees of many journals that include "Expert Systems with Applications" (Elsevier) and "Archives of Control Sciences" (a Quarterly of Polish Academy of Sciences). Dr. Davidrajuh has published over 150 publications in diverse areas such as supply chain, e-commerce, e-government, modeling and simulation, discrete event systems, green power generation, etc. His three papers won the best paper awards: "Modeling humanoid robot as a discrete event system" at the IEEE Third International Conference on Artificial Intelligence, Modeling, and Simulation (AIMS2015), in December 2015, in Kuala Lumpur; "GPenSIM for Performance Evaluation of Event Graphs" at the International Scientific and Technical Conference on Manufacturing (Manufacturing 2017), in October 2017, in Poznan, Poland; "Measuring Network Centrality in Petri Nets" at the 2018 IEEE International Conference on Advanced Manufacturing (ICAM), in November 2018, in Yunlin, Taiwan.

He has organized over 60 international conferences and has given keynote speeches in four conferences. His current research interests are "Modeling, simulation, and performance analysis of discrete-event systems", Algorithms, and Graph Theory. He is a senior member of IEEE and a Fellow of the British Computer Society. He is also a member of the Norwegian Academy of Technical Sciences.