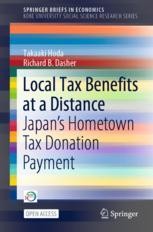 Local Tax Benefits at a Distance

This book discusses the concepts, types, models, and patterns of Japan’s Hometown Tax Donation Payment system, to provide a clear picture of this newly developed unique and innovative fund-raising tool used by municipalities. It also sheds light on the influences that reciprocal gifts provided by each municipality to donors have on local economies by reviewing empirical works and surveys targeting local business owners and local financial institutions. A distinguishing feature of the book is that it introduces a new social finance mechanism that is unique to the Japanese market and could provide policy implications for small and medium-sized enterprises (SMEs) as well as regional development. Furthermore, the book explores the efficacy of the demand–pull approach to support-strengthening SMEs, especially in rural areas. Finally, the book identifies some lessons learned from the system with a view toward advancing research on this phenomenon and making the system efficient and sustainable. As a whole, the book can provide ample benefits to novices, academics, researchers, and policymakers interested in Hometown Tax Donation Payment, an innovative social finance tool.

Takaaki Hoda is a professor of corporate finance, entrepreneurial finance, and social finance at the Graduate School of Business Administration, Kobe University, Japan. He is also a visiting scholar at Stanford University and Hitotsubashi University, respectively. He earned a Ph.D. (commerce) from Waseda University, Japan. His works have appeared in several reputed journals such as Venture Review and Public Policy Review. He has a long history of conducting research on crowdfunding and Japan's Hometown Tax Donation Payment system. He is the co-author of Crowdfunding: Lessons from Japan’s Approach, published by Springer in 2018. He has the longest history as a researcher in the field of Japan's Hometown Tax Donation Payment, having conducted interviews at more than 50 municipalities in Japan. He has received the best paper award from The Japan Academic Society for Ventures and Entrepreneurs.

Richard B. Dasher, Ph.D., is director of the US–Asia Technology Management Center and adjunct professor at Stanford University. From 1998 to 2015, he concurrently served as executive director of Stanford’s industry-funded Center for Integrated Systems (CIS). He is an advisor to start-up companies, business accelerators, and venture capital firms in Silicon Valley (U.S.A), Canada, China, India, Japan, and South Korea. Dr. Dasher served as a board director and member of the Management Council of Tohoku University in Japan (2004–2010). He lived in Japan from 1986 to 1993, first as director of the U.S. State Department’s Advanced Training Centers in Yokohama and Seoul for U.S. and select Commonwealth country diplomats, and then as a board director of two SMEs in Tokyo. His current research includes U.S. and Asian patterns of entrepreneurial innovation, the impact of new technologies on value chains, and open innovation management. He is fluent in Japanese.