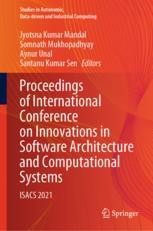 Jyotsna Kumar Mandal, M. Tech. in Computer Science from the University of Calcutta in 1987, awarded Ph. D. (Engineering) in Computer Science and Engineering by Jadavpur University in 2000. He is working as a professor of Computer Science and Engineeringand the former dean, Faculty of Engineering, Technology and Management, KU, for two consecutive terms during 2008–2012. He is the director ofIQAC, Kalyani University, and the chairman, CIRM, and placement cell. He served as a professor of Computer Applications, KGEC, as an associate professor of Computer Science, an assistant professor of Computer Science, North Bengal University for fifteen years, and as a lecturer at NERIST, Itanagar, for one yearand has 34 years of teaching and research experience in coding theory, data and network security and authentication,remote sensing and GIS-based applications, data compression, error correction, visual cryptography and steganography. He was awarded 23 Ph. D. Degrees, one submitted and 8 are pursuing;supervised 03 M. Phil, more than 70 M. Tech and more than 125 M.C.Adissertations;a guest editor of MST Journal (SCI indexed) of Springer;published more than 400 research articles out of which 180 articles in International Journals;published seven books from LAP Germany, IGI Global, Springer, etc.;organized more than 40 International Conferences and Corresponding Editors of edited volumes and conference publications of Springer, IEEE,Elsevier etc.; and edited more than 40 volumes as volume editor. He received “SikshaRatna” award from Higher Education, Government of West Bengal, India, in the year 2018 for outstanding teaching activities;Vidyasagar award from International Society for Science Technology and management in the fifth International Conference on Computing, Communication and Sensor Network; Chapter Patron Award, CSI Kolkata Chapter on 2014; “Bharat Jyoti Award” for meritorious services, outstanding performances and remarkable role in the field of Computer Science and Engineering on 29 August 2012 from International Friendship Society (IIFS), New Delhi;and A. M. Bose Memorial Silver medal and Kali PrasannaDasgupta Memorial Silver medal from Jadavpur University.

Dr. Somnath Mukhopadhyay is currently an assistant professor at the Department of Computer Science and Engineering, Assam University, Silchar, India. He completed his M. Tech. and Ph.D. degrees in Computer Science and Engineering at the University of Kalyani, India, in 2011 and 2015, respectively. He has co-authored one book and has ten edited books to his credit. He has published over 30 papers in various international journals and conference proceedings, as well as six chapters in edited volumes. His research interests include digital image processing, computational intelligence and hyper spectral imaging. He is a member of ACM,a life member of the Computer Society of India and currently, the regional student coordinator (RSC) of Region II, Computer Society of India.

Dr. Aynur Unal, educated at Stanford University (class of ’73) comes from a strong engineering design and manufacturing tradition, majored in Structural Mechanics-Mechanical Engineering-Applied Mechanics and Computational Mathematics from Stanford University. She has taught at Stanford University till mid 80’s and established the Acoustics Institute in conjunction with NASA-AMES research fellowships funds. Her work on “New Transform Domains for the Onset of Failures” received the most innovative research awards. Most recently, she is bringing in the social responsibility dimension into her incubation and innovation activities by getting involved in social entrepreneurial projects on street children and ageing care. She is also the strategic adviser for Institutional Development to IIT Guwahati. She is a preacher of Open Innovation and she always encourages students to innovate and helps them with her support.