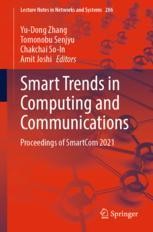 Smart Trends in Computing and Communications

This book gathers high-quality papers presented at the Fifth International Conference on Smart Trends in Computing and Communications (SmartCom 2021), organized by Global Knowledge Research Foundation (GR Foundation) from March 2 – 3 , 2021. It covers the state of the art and emerging topics in information, computer communications, and effective strategies for their use in engineering and managerial applications. It also explores and discusses the latest technological advances in, and future directions for, information and knowledge computing and its applications.

Prof. Yu-Dong Zhang received his B.S. and M.S. degrees from Nanjing University of Aeronautics and Astronautics in 2004 and 2007, prior to completing his Ph.D. in Signal and Information Processing at Southeast University in 2010. From 2010 to 2012, he worked at Columbia University as a postdoc. From 2012 to 2013, he worked as a research scientist at Columbia University and New York State Psychiatric Institute. From 2013 to 2017, he worked as a full professor and a doctoral advisor at the School of Computer Science and Technology, Nanjing Normal University. Since 2018, he has been a full professor at the Department of Informatics, University of Leicester, UK.  Prof. Tomonobu Senjyu received his B.S. and M.S. degrees in Electrical Engineering from the University of the Ryukyus, Nishihara, Japan, in 1986 and 1988, respectively, and his Ph.D. in Electrical Engineering from Nagoya University, Japan, in 1994. He is currently a full professor at the Department of Electrical and Electronics Engineering, University of the Ryukyus. His research interests include renewable energy, power system optimization and operation, power electronics, and advanced control of electrical machines.  Prof. Chakchai So-In has been with the Department of Computer Science at Khon Kaen University since 2010. Dr. So-In received his B.E. and M.E. degrees from Kasetsart University (KU), Bangkok, Thailand, in 1999 and 2001, respectively. He also completed M.S. and Ph.D. degrees in Computer Engineering at the Department of Computer Science and Engineering, Washington University, in St. Louis (WUSTL), MO, USA, in 2006 and 2010. He has authored more than 100 publications in prominent journals and proceedings, together with ten books. His research interests include mobile computing/sensor networks, Internet of things, computer/wireless/distributed networks, cybersecurity, intelligent systems, and the future Internet. He is a senior member of the IEEE and ACM.  Dr. Amit Joshi is currently the director of Global Knowledge Research Foundation, also an entrepreneur, and researcher who has completed his Masters and research in the areas of cloud computing and cryptography in medical imaging. Dr. Joshi has an experience of around ten years in academic and industry in prestigious organizations. Dr. Joshi is an active member of ACM, IEEE, CSI, AMIE, IACSIT-Singapore, IDES, ACEEE, NPA, and many other professional societies. Currently, Dr. Joshi is the international chair of InterYIT at International Federation of Information Processing (IFIP, Austria). He has presented and published more than 50 papers in national and international journals/conferences of IEEE and ACM. Dr. Joshi has also edited more than 40 books which are published by Springer, ACM, and other reputed publishers. Dr. Joshi has also organized more than 50 national and international conferences and programs in association with ACM, Springer, IEEE, to name a few across different countries including India, UK, Europe, USA, Canada, Thailand, Egypt, and many more.