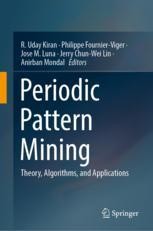 The first chapter is an introduction to pattern mining and periodic pattern mining. The concepts of periodicity, periodic support, search space exploration techniques, and pruning strategies are discussed. The main types of algorithms are also presented such as periodic-frequent pattern growth, partial periodic pattern-growth, and periodic high-utility itemset mining algorithm. Challenges and research opportunities are reviewed.

Rage Uday Kiran is an associate professor at the University of Aizu in Japan.   He has published over 50 articles in refereed journals and international conferences, such as EDBT, SSDBM, CIKM, IEEE FUZZY, PAKDD, DASFAA, DEXA and JSS. His current research interests include data mining, parallel computation, air pollution data analytics, traffic congestion data analytics, recommender systems, and ICTs for Agriculture.

Philippe Fournier-Viger is professor at the Harbin Institute of Technology. He has published more than 300 research papers with over 7200 citations. He is Associate Editor-in-Chief of Applied Intelligence and founder of the SPMF pattern mining library.

Jerry Chun-Wei Lin received his Ph.D. from the Department of Computer Science and Information Engineering, National Cheng Kung University, Tainan, Taiwan in 2010. He is currently a full Professor with the Department of Computer Science, Electrical Engineering and Mathematical Sciences, Western Norway University of Applied Sciences, Bergen, Norway. He has published more than 400 research articles in several top-tier conferences and journals. He has recognized as the most cited Chinese Researcher respectively in 2018, 2019, and 2020 by Scopus/Elsevier. He is the Fellow of IET (FIET), senior member for both IEEE and ACM.