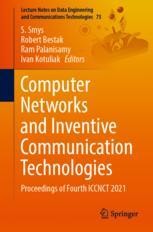 This book is a collection of peer-reviewed best-selected research papers presented at 4th International Conference on Computer Networks and Inventive Communication Technologies (ICCNCT 2021). The book covers new results in theory, methodology, and applications of computer networks and data communications. It includes original papers on computer networks, network protocols and wireless networks, data communication technologies, and network security. The proceedings of this conference are a valuable resource, dealing with both the important core and the specialized issues in the areas of next-generation wireless network design, control, and management, as well as in the areas of protection, assurance, and trust in information security practice. It is a reference for researchers, instructors, students, scientists, engineers, managers, and industry practitioners for advanced work in the area.

Dr.S.Smys received his M.E. and Ph.D. degrees all in Wireless Communication and Networking from Anna University and Karunya University, India. His main area of research activity is localization and routing architecture in wireless networks. He serves as Associate Editor of Computers and Electrical Engineering (C&EE) Journal, Elsevier, and Guest Editor of MONET Journal, Springer. He is served as Reviewer for IET, Springer, Inderscience and Elsevier journals. He has published many research articles in refereed journals and IEEE conferences. He has been General chair, Session Chair, TPC Chair and Panelist in several conferences. He is Member of IEEE and Senior Member of IACSIT wireless research group. He has been serving as Organizing Chair and Program Chair of several International conferences and in the Program Committees of several International conferences. Currently, he is working as Professor in the Department of Information Technology at RVS technical Campus, Coimbatore, India.

Robert Bestak obtained Ph.D. degree in Computer Science from ENST Paris, France (2003), and M.Sc. degree in Telecommunications from Czech Technical University in Prague, CTU, Czech Republic (1999). Since 2004, he has been Assistant Professor at Department of Telecommunication Engineering, Faculty of Electrical Engineering, CTU. He participated in several national, EU, and third-party research projects. He is Czech Representative in the IFIP TC6 organization, and Chair of Working Group TC6 WG6.8. He annually serves as Steering and Technical Program Committee Member of numerous IEEE/IFIP conferences (Networking, WMNC, NGMAST, etc.), and he is Member of Editorial Board of several international journals (Computers & Electrical Engineering, Electronic Commerce Research Journal, etc.). His research interests include 5G networks, spectrum management and big data in mobile networks.

Ivan Kotuliak received Ph.D. degree from both Versailles University and Slovak University of Technology in 2003. From that time, he joined Slovak University of Technology and worked as Researcher and Associate Professor. His research orientation is focused on network performance, including NGN architecture, wireless and mobile networking, VoIP systems and future Internet. He has been Author and Co-Author of more than sixty scientific papers and leads and participates in several international and national research projects.