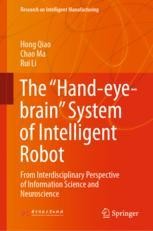 The “Hand-eye-brain” System of Intelligent Robot

From Interdisciplinary Perspective of Information Science and Neuroscience

This book reports the new results of intelligent robot with hand-eye-brain, from the interdisciplinary perspective of information science and neuroscience. It collects novel research ideas on attractive region in environment (ARIE), intrinsic variable preserving manifold learning (IVPML) and biologically inspired visual congnition, which are theoretically important but challenging to develop the intelligent robot. Furthermore, the book offers new thoughts on the possible future development of human-inspired robotics, with vivid illustrations. The book is useful for researchers, R&D engineers and graduate students working on intelligent robots.