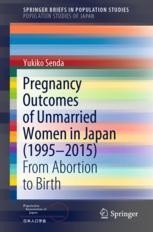 From Abortion to Birth

This book provides a key to understanding why there was an increase in extra-marital fertility in Japan from the 1990s to the 2010s, particularly between 1995 and 2015, and the factors which contribute to the multistratification of unmarried mothers, the number of which has increased ensuingly. It also allows for international comparison by providing data on outcomes of extra-marital childbirth.

Previously, it was believed that the idea of a ‘second demographic transition’ did not apply to Japan, which had a relatively low rate of extra-marital fertility. However, more recently, though still at a low level, a subtle but gradual rise is seen in the number of women who become unmarried mothers as a result of births outside marriage.

This trend suggests that the social environment surrounding pregnancy, childbirth, and marriage is changing. In this book, various data such as national statistics, nationwide surveys, and media discourse are analysed with a view to revealing the factors affecting unmarried women’s decisions when they discover they are pregnant. Various matters are discussed, such as changes in sexual activity and contraceptive use, advance in reproductive technology, the law and government policies pertaining to adoption, social consciousness towards unwed mothers, the change in perception of abortion from the religious perspective, and difference of socioeconomic status depending on the women’s occupation.

Facts from vital statistics are first laid out, showing that, while abortion has consistently been on the decrease from the 1990s onward, shotgun marriages have peaked out. Adoption is rare and remains very small in proportion, while extra-marital fertility is on the rise. The author then points to the possibility that greater lenience found in the social consciousness towards unwed mothers in recent years is a pull factor for the increase in extra-marital fertility. Further, by analysing vital statistics, it is revealed that the probability of becoming a mother without marrying changed with the woman’s occupation, explicable by the stability of employment and level of income, and that between 1995 and 2015, the effects of the job factor are changing.