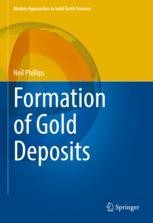 This book addresses the origin of gold deposits to answer questions of science and curiosity. These answers contribute in turn to the improved exploration and mining of gold. Initially there is a summary of the methods used to address the genesis of gold deposits including some of the essential science and concepts. Five basic observations follow that apply to many gold deposits and need to be considered in any genetic ideas. Magmatic processes enriching gold are discussed followed by the role of aqueous fluids during gold deposit formation at elevated temperatures and pressures. Modifying effects after deposit formation include high-grade metamorphism, retrogression, weathering, and erosion. The main types of gold deposits are then explained within the spectrum of viable genetic ideas, with informal names for these examples that include gold-only, gold-plus, Carlin, slate-belt, epithermal, porphyry, iron oxide copper gold, and Archean greenstone. Case histories are included in which the role of gold geology contributed directly to discoveries—one example is at the province-scale and another at the goldfield-scale.

Unlike other books on the subject, this one addresses virtually all gold deposit types rather than focusing on one type in isolation. The primary readership includes industry geologists, senior undergraduates, postgraduates, and those with some knowledge of science and an interest in the gold industry.

Neil Phillips graduated in geoscience from the University of Melbourne (BSc) and Monash University (BSc Hons, PhD) where his thesis was on the metamorphism and geochemistry at Broken Hill, Australia. He subsequently completed the Advanced Management Program at Harvard Business School.

At the University of Western Australia, he co-founded the Archean Gold Group in 1980 with David Groves as they pioneered many of the geological principles used in gold exploration today. Two years were then spent engaged in underground mapping of the Golden Mile in the Kalgoorlie goldfield. He joined the University of Witwatersrand in Johannesburg and established research projects at all the operating Witwatersrand gold mines and continues that research focus and interest today. He was subsequently Professor of Economic Geology at James Cook University where he developed the extended field programs in the Cloncurry – Mt. Isa region.

As a consultant in Kalgoorlie for Minsaco Resources and then General Manager for Great Central Mines, he led the geological development of the Yandal gold province north of Kalgoorlie in a role that included teaching, research, and mentoring with teams of mine and exploration geologists.

Honorary professorial appointments at the University of Melbourne, Monash University, and Stellenbosch University in South Africa have involved collaborative research, valorisation of this research through community engagement, and leadership of the Melbourne Geology of Gold course since 1995 and a similar course on gold in South Africa.

Neil was editor of the Applied Earth Science journal for ten years from 2010, regularly publishes in scientific journals, and has written and edited several books on geoscience and cross-country navigation. He was President of the International Rogaining Federation 1989-2013 and co-author of three books on the sport of rogaining. Neil was editor of the AusIMM Australian Ore Deposit monograph in 2017 leading 350 authors and reviewers in a volume describing 200 mineral deposits.