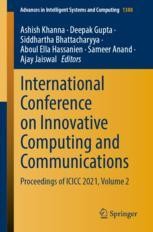 This book includes high-quality research papers presented at the Fourth International Conference on Innovative Computing and Communication (ICICC 2021), which is held at the Shaheed Sukhdev College of Business Studies, University of Delhi, Delhi, India, on February 20–21, 2021. Introducing the innovative works of scientists, professors, research scholars, students and industrial experts in the field of computing and communication, the book promotes the transformation of fundamental research into institutional and industrialized research and the conversion of applied exploration into real-time applications.

Dr. Ashish Khanna has 16 years of expertise in Teaching, Entrepreneurship, and Research & Development. He received his Ph.D. degree from National Institute of Technology, Kurukshetra. He has completed his M. Tech. and B. Tech. from GGSIPU, Delhi. He has completed his Post-Doc from Internet of Things Laboratory at Inatel, Brazil, and University of Valladolid, Spain. He has published around 55 SCI indexed papers in IEEE Transaction, Springer, Elsevier, Wiley, and many more reputed Journals with cumulative impact factor of above 100. He has around 120 research articles in top SCI/ Scopus journals, conferences and book chapters. He is Co-Author of around 30 edited and text books. His research interest includes distributed systems, MANET, FANET, VANET, IoT, machine learning, and many more. He is Originator of Bhavya Publications and Universal Innovator Laboratory. Universal Innovator is actively involved in research, innovation, conferences, startup funding events, and workshops. He has served the research field as a Keynote Speaker/ Faculty Resource Person/ Session Chair/ Reviewer/ TPC Member / post-doctorate supervision. He is Convener and Organizer of ICICC conference series. He is currently working at the Department of Computer Science and Engineering, Maharaja Agrasen Institute of Technology, under GGSIPU, Delhi, India. He is also serving as Series Editor in Elsevier and De Gruyter publishing houses.

Dr. Deepak Gupta received a B.Tech. degree in 2006 from the Guru Gobind Singh Indraprastha University, India. He received M.E. degree in 2010 from Delhi Technological University, India and Ph.D. degree in 2017 from Dr. APJ Abdul Kalam Technical University, India. He has completed his Post-Doc from Inatel, Brazil. With 13 years of rich expertise in teaching and two years in the industry; he focuses on rational and practical learning. He has contributed massive literature in the fields of Intelligent Data Analysis, Biomedical Engineering, Artificial Intelligence, and Soft Computing. He has served as Editor-in-Chief, Guest Editor, and Associate Editor in SCI and various other reputed journals (IEEE, Elsevier, Springer, & Wiley). He has actively been an organizing end of various reputed International conferences. He has authored/edited 50 books with National/International level publishers (IEEE, Elsevier, Springer, Wiley, and Katson). He has published 180 scientific research publications in reputed International Journals and Conferences including 94 SCI Indexed Journals of IEEE, Elsevier, Springer, Wiley, and many more.

Prof. Siddhartha Bhattacharyya, FIET (UK), is currently the Principal of Rajnagar Mahavidyalaya, Birbhum, India. Prior to this, he was Professor in Christ University, Bangalore, India. He served as Senior Research Scientist at the Faculty of Electrical Engineering and Computer Science of VSB Technical University of Ostrava, Czech Republic, from October 2018 to April 2019. He also served as Principal of RCC Institute of Information Technology, Kolkata, India. He is Co-Author of 6 books and Co-Editor of 75 books and has more than 300 research publications in international journals and conference proceedings to his credit. His research interests include soft computing, pattern recognition, multimedia data processing, hybrid intelligence, and quantum computing.

Prof. Aboul Ella Hassanein is Founder and Head of the Egyptian Scientific Research Group (SRGE) and Professor of Information Technology at the Faculty of Computer and Artificial Intelligence, Cairo University. Professor Hassanien is Ex-Dean of the faculty of computers and information, Beni Suef University. Professor Hassanien has more than 800 scientific research papers published in prestigious international journals and over 40 books covering such diverse topics as data mining, medical images, intelligent systems, social networks, and smart environment. Prof. Hassanien won several awards, including the Best Researcher of the Youth Award of Astronomy and Geophysics of the National Research Institute, Academy of Scientific Research (Egypt, 1990). He was also granted a Scientific Excellence Award in humanities from the University of Kuwait for the 2004 Award and received the scientific - University Award (Cairo University, 2013). Also, he was honored in Egypt as the best researcher at Cairo University in 2013.  He was also received the Islamic Educational, Scientific and Cultural Organization (ISESCO) prize on Technology (2014) and received the State Award for excellence in engineering sciences 2015. He was awarded the medal of Sciences and Arts of the first class by the President of the Arab Republic of Egypt, 2017.

Dr. Sameer Anand is currently working as Assistant Professor in the Department of Computer science at Shaheed Sukhdev College of Business Studies, University of Delhi, Delhi. He has received his M.Sc., M.Phil., and Ph.D. (Software Reliability) from Department of Operational Research, University of Delhi. He is a recipient of ‘Best Teacher Award’ (2012) instituted by Directorate of Higher Education, Govt. of NCT, Delhi.  The research interest of Dr. Anand includes operational research, software reliability, and machine learning.  He has completed an Innovation project from the University of Delhi.  He has worked in different capacities in International Conferences.  Dr. Anand has published several papers in the reputed journals like IEEE Transactions on Reliability, International journal of production research (Taylor & Francis), International Journal of Performability Engineering, etc. He is Member of Society for Reliability Engineering, Quality, and Operations Management. Dr. Sameer Anand has more than 16 years of teaching experience.

Dr. Ajay Jaiswal is currently serving as Assistant Professor in the Department of Computer Science of Shaheed Sukhdev College of Business Studies, University of Delhi, Delhi. He Co-Editor of two books/Journals and Co-Author of dozens of research publications in International Journals and conference proceedings. His research interest includes pattern recognition, image processing, and machine learning.  He has completed an interdisciplinary project titled " Financial Inclusion-Issues and Challenges: An Empirical Study" as Co-PI. This project was awarded by the University of Delhi. He obtained his masters from the University of Roorkee (now IIT Roorkee) and Ph.D. from Jawaharlal Nehru University, Delhi. He is a recipient of the Best Teacher Award from the Government of NCT of Delhi. He has more than nineteen years of teaching experience.