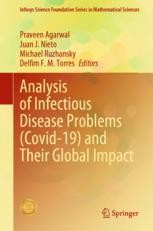 Analysis of Infectious Disease Problems (Covid-19) and Their Global Impact

This book is a collection of selected research articles discussing the analysis of infectious diseases by using mathematical modelling in recent times. Divided into two parts, the book gives a general and country-wise analysis of Covid-19. Analytical and numerical techniques for virus models are presented along with the application of mathematical modelling in the analysis of their spreading rates and treatments. The book also includes applications of fractional differential equations as well as ordinary, partial, and integrodifferential equations with optimization methods. Probability distribution and their biomathematical applications have also been studied. This book is a valuable resource for researchers, scholars, bio-mathematicians, and medical experts.

Dr. PRAVEEN AGARWAL has been actively involved in research as well as pedagogical activities for the last 20 years. His major research interests include special functions, fractional calculus, numerical analysis, differential and difference equations, inequalities, and fixed point theorems.  He is an excellent scholar, dedicated teacher, and prolific researcher. He has published 7 research monographs and edited volumes and more than 150 publications (with almost 100 mathematicians all over the world) in prestigious national and international mathematics journals. He worked previously either as a regular faculty or as a visiting professor and scientist in universities in several countries, including India, Germany, Turkey, South Korea, UK, Russia, Malaysia, and Thailand.  He has held several positions including a visiting professor, visiting scientist, and professor at various universities in different parts of the world. Specially, he was awarded the most respected International Centre for Mathematical Sciences (ICMS) Group Research Fellowship to work with Prof. Dr. Michael Ruzhansky, -Imperial College London at ICMS Centre, Scotland, UK, and during 2017–2018, he was awarded most respected TUBITAK Visiting Scientist Fellowship to work with Prof. Dr. Onur at AhiEvran University, Turkey. He has been awarded by Most Outstanding Researcher-2018 (Award for contribution to Mathematics) by the Union Minister of Human Resource Development of India, Mr. Prakash Javadekar in 2018. According to Google Scholar, he is cited more than 2,553 times, and on Scopus, his work is cited more than 1,191 times.  He is the recipient of several notable honours and awards.

He has provided a significant service to Anand International College of Engineering, Jaipur. Under his leadership during 2010–2020, Anand ICE consistently progressed in education and preparation of students, and in the new direction of academics, research, and development. His overall impact toon the institute is considerable. Many scholars from different nations, including China, Uzbekistan, Thailand, and African Countries came to work under his guidance.  The majority of these visiting post-doctoral scholars were sent to work under him by their employing institutions for at least one month.  He regularly disseminates his research at invited talks/colloquiums (over 25 institutions all over the world). He has been invited to give plenary/keynote lectures at international conferences in the USA, Russia,  India, Turkey, China, Korea, Malaysia, Thailand, Saudi Arabia, Germany, UK, Turkey,  and Japan. He has served over 40 journals in the capacity of an editor/honorary editor, or associate editor, and published 5 books as an editor. He has also organized international conferences/workshops’/seminars/summer schools.  In summary of these few inadequate paragraphs, he is a visionary scientist, educator, and administrator who have contributed to the world through his long service, dedication, and tireless efforts.

JUAN J. NIETO is a professor of Mathematical Analysis at the University of Santiago de Compostela, Spain, since 1991, and a fellow of the Royal Galician Academy of Sciences. He received his Ph.D. in Mathematics from the University of Santiago de Compostela, Spain, in 1983. His most influential contributions to date are in the area of differential equations, and his research interests are in fractional calculus, fuzzy equations, and epidemiological models. He is one of the most cited mathematicians in the world according to the Web of Knowledge and appears in the Thompson Reuters Highly Cited Researchers list. His works have been published in various journals and conference proceedings of repute.

MICHAEL RUZHANSKY is a senior full professor at the Department of Mathematics, Ghent University, Belgium, and a professor at the School of Mathematical Sciences, Queen Mary University of London, UK. He received his Ph.D. in Mathematics from Utrecht University, The Netherlands, in 1998, with the thesis titled “Singular Fibrations with Affine Fibers, with Applications to the Regularity Properties of Fourier Integral Operators”. He completed his M.Sc. in Mathematics and Education at St. Petersburg State University, Russia, in 1995, with the thesis titled “Linear Optimal Filtering Theory with the Generalized Quadratic Quality Functional.”. He is a recipient of several awards, including Ferran Sunyer I Balaguer Prize (2018), Odysseus I Project (2018), Ferran Sunyer I Balaguer Prize (2014), and Daiwa Adrian Prize (2010).

DELFIM F. M. TORRES is a full professor of Mathematics at the Department of Mathematics, the University of Aveiro (UA), Portugal. He received his Ph.D. in Mathematics from the University of Aveiro, in 2002. He is also the director of the FCT Doctoral Programme Consortium in Mathematics and Applications (MAP-PDMA) of the University of Minho, Portugal, and the University of Beira Interior, Portugal. His main research areas are calculus of variations and optimal control, optimization with emphasis on the regularity of solutions and necessary optimality conditions, fractional derivatives and integrals, dynamic equations on time scales or measure chains, and mathematical biology. He has published over 400 scientific and pedagogical publications, including research papers in reputed international journals, refereed conference proceedings, chapters in books, and books (as an author and editor). Having guided 18 Ph.D. students, he has a strong experience in graduate and postgraduate student supervision and teaching mathematics, both in Portugal and abroad. Moreover, he has led teams and has been a member of several national and international R&D projects, including EU projects and networks. He was a key scientist of the European Marie Curie Project SADCO (Sensitivity Analysis for Deterministic Controller Design), Network for Initial Training, under the 7th Framework Programme FP7-PEOPLE-2010-ITN.