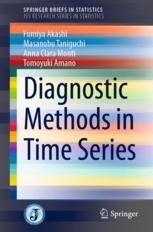 This book contains new aspects of model diagnostics in time series analysis, including variable selection problems and higher-order asymptotics of tests. This is the first book to cover systematic approaches and widely applicable results for nonstandard models including infinite variance processes. The book begins by introducing a unified view of a portmanteau-type test based on a likelihood ratio test, useful to test general parametric hypotheses inherent in statistical models. The conditions for the limit distribution of portmanteau-type tests to be asymptotically pivotal are given under general settings, and very clear implications for the relationships between the parameter of interest and the nuisance parameter are elucidated in terms of Fisher-information matrices. A robust testing procedure against heavy-tailed time series models is also constructed in the context of variable selection problems. The setting is very reasonable in the context of financial data analysis and econometrics, and the result is applicable to causality tests of heavy-tailed time series models. In the last two sections, Bartlett-type adjustments for a class of test statistics are discussed when the parameter of interest is on the boundary of the parameter space. A nonlinear adjustment procedure is proposed for a broad range of test statistics including the likelihood ratio, Wald and score statistics.

Fumiya Akashi is an Assistant Professor in the Faculty of Economics at the University of Tokyo. His research interests include time series analysis, robust inference for infinite variance processes and empirical likelihood method for time series models.
Masanobu Taniguchi is a Professor in the Research Institute for Science and Engineering at Waseda University. His research interests include time series analysis, mathematical statistics, multivariate analysis, information geometry, signal processing, econometric theory and financial engineering. His main contributions in time series analysis are collected in his book “Asymptotic Theory of Statistical Inference for Time Series” (New York: Springer-Verlag, 2000). He received the Ogawa Prize (Japan) in 1989, the Econometric Theory Award (USA) in 2000, the Japan Statistical Society Prize in 2004, and Analysis Award in 2013 (Mathematical Society of Japan). He is a Fellow of the Institute of Mathematical Statistics (USA, 1987–).
Anna Clara Monti is a Professor in the Department of Law, Economics, Management and Quantitative Methods at University of Sannio. Her research interests concern Statistical Inference, Robustness, Ordinal Response Models and Time Series.
Tomoyuki Amano is an Associate Professor in Division of General Education at The University of Electro-Communications. He received the doctorate degrees in science from Waseda University, Japan and is now an associate professor in the Division of General Education at University of Electro-Communications, Japan. He is interested in research on financial time series and estimating function estimator for time series.