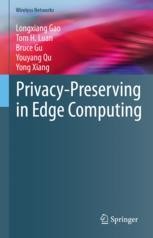 With the rapid development of big data, it is necessary to transfer the massive data generated by end devices to the cloud under the traditional cloud computing model. However, the delays caused by massive data transmission no longer meet the requirements of various real-time mobile services. Therefore, the emergence of edge computing has been recently developed as a new computing paradigm that can collect and process data at the edge of the network, which brings significant convenience to solving problems such as delay, bandwidth, and off-loading in the traditional cloud computing paradigm. By extending the functions of the cloud to the edge of the network, edge computing provides effective data access control, computation, processing and storage for end devices. Furthermore, edge computing optimizes the seamless connection from the cloud to devices, which is considered the foundation for realizing the interconnection of everything. However, due to the open features of edge computing, such as content awareness, real-time computing and parallel processing, the existing problems of privacy in the edge computing environment have become more prominent. The access to multiple categories and large numbers of devices in edge computing also creates new privacy issues.

Longxiang Gao received his PhD in Computer Science from Deakin University, Australia. He is currently a Senior Lecturer and Deputy Director of Deakin Blockchain Innovation Lab at Deakin University. His research interests include Edge computing, Blockchain, 5G and AI and mobile networks. Dr. Gao has over 80 publications, including patent, monograph, book chapter, journal and conference papers. Some of his publications have been published in the top venue, such as IEEE TMC, IEEE TPDS, IEEE IoTJ, IEEE TDSC, IEEE TVT, IEEE TCSS, IEEE TII and IEEE Access. He has been Chief Investigator (CI) for more than 20 research projects (the total awarded amount is $5.5million), from pure research project to contracted industry research. Dr. Gao is a Senior Member of IEEE and active in IEEE Communication Society. He has served as the TPC co-chair, publicity co-chair, organization chair and TPC member for many international conferences. He is the Associate Editor of IEEE Access and the Assessor of Australian Research Council (ARC) projects.

Tom H Luan received the B.E. degree from the Xi'an Jiaotong University, China, in 2004, the Master degree from the Hong Kong University of Science and Technology, Hong Kong, in 2007, and the Ph.D. degree from the University of Waterloo, Canada, in 2012, all in Electrical and Computer Engineering. During 2013 to 2017, Dr. Luan was a Lecturer in Mobile and Apps at the Deakin University, Australia. Since 2017, he is with the School of Cyber Engineering in Xidian University, China, as a professor. His research mainly focuses on the content distribution and media streaming in vehicular ad hoc networks and peer-to-peer networking, and protocol design and performance evaluation of wireless cloud computing and edge computing. Dr. Luan has published more than 100 technical works and received IEEE VTS 2017 Best Land Transportation Paper Award.

Bruce Gu is currently a Lecturer in the Discipline of Information Technology, College of Engineering and Science, Victoria University. He received his PhD in Computer Science from Deakin University, Australia in 2020. In 2009 and 2011, he received his BInfoTech and MIT degrees from Deakin University, respectively. He has over 10 years of industry engagement experience in Australia. His research interests include artificial intelligence, cybersecurity, privacy preserving, blockchain, Internet of Things and Edge AI. He has served as the TPC member for many international conferences. He also serve as reviewer for many top quality journals.

Youyang Qu received his PhD at School of Information Technology, Deakin University, Australia. He is currently a research fellow of Deakin University. His research interests focus on dealing with security and customizable privacy issues in Blockchain, Social Networks, Machine Learning, and Edge Computing. He has published over 30 publications including high-quality journals such as IEEE Internet of Things Journal, IEEE Wireless Communications, IEEE Transactions on Industrial informatics, etc. He is active in IEEE Communication Society and has served as a TPC Member for IEEE flagship conferences including IEEE ICC and IEEE Globecom. He also served as the publicity chair of SPDE2020.

Yong Xiang received the PhD degree in the Electrical and Electronic Engineering from The University of Melbourne, Australia. He is a Professor at the School of Information Technology, Deakin University, Australia. His research interests include information security and privacy, signal and image processing, data analytics and machine intelligence, Internet of Things, and blockchain. He has published 5 monographs, over 150 refereed journal articles, and numerous conference papers in these areas. He is the Senior Area Editor of IEEE Signal Processing Letters and the Associate Editor of IEEE Communications Surveys and Tutorials. He has served as Honorary Chair, General Chair, Program Chair, TPC Chair, Symposium Chair, and Track Chair for a number of international conferences.