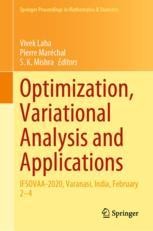 This book includes selected papers presented at the Indo-French Seminar on Optimization, Variational Analysis and Applications (IFSOVAA-2020), held at the Department of Mathematics, Institute of Science, Banaras Hindu University, Varanasi, India, from 2–4 February 2020. The book discusses current optimization problems and their solutions by using the powerful tool of variational analysis. Topics covered in this volume include set optimization, multiobjective optimization, mathematical programs with complementary, equilibrium, vanishing and switching constraints, copositive optimization, interval-valued optimization, sequential quadratic programming, bound-constrained optimization, variational inequalities, and more. Several applications in different branches of applied mathematics, engineering, economics, finance, and medical sciences have been included. Each chapter not only provides a detailed survey of the topic but also builds systematic theories and suitable algorithms to deduce the most recent findings in literature. This volume appeals to graduate students as well as researchers and practitioners in pure and applied mathematics and related fields that make use of variational analysis in solving optimization problems.

PIERRE MARECHAL is Professor of Mathematics at Université Paul Sabatier, Toulouse, France. He received his Ph.D. in 1997, master’s degree in 1993, and engineering diploma in 1991 form the University of Toulouse, France. Since 1997, he has worked in different positions at the University of Toulouse, France; Simon Fraser University, Vancouver, Canada; and the University of Montpellier, France. His research interests include inverse problems, optimization, convex analysis, calculus of variations, conditional number optimization, and condition number optimization. He has supervised eight Ph.D. students till date and worked in the committee of many scholars. He has delivered invited talks at many international conferences and universities from time to time and organized a number of international conferences and workshops. He has published considerable research articles in international journals of repute.

S. K. MISHRA is Professor at the Department of Mathematics, Institute of Science, Banaras Hindu University (BHU), India. He completed his Ph.D. in Mathematics from BHU in 1995. With a teaching experience of over 22 years, he has guided 18 Ph.D. students so far. He has published several research articles in journals of repute and authored a number of books with renowned publishers. He is the associate editor, managing editor or guest editor of international journals of repute and has organized several national and international conferences/seminars in India and abroad.