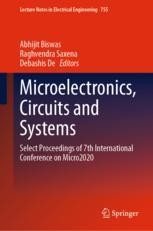 This book presents a collection of peer-reviewed articles from the 7th International Conference on Microelectronics, Circuits, and Systems – Micro 2020. The volume covers the latest development and emerging research topics of material sciences, devices, microelectronics, circuits, nanotechnology, system design and testing, simulation, sensors, photovoltaics, optoelectronics, and its different applications. This book also deals with several tools and techniques to match the theme of the conference. It will be a valuable resource for researchers, professionals, Ph.D. scholars, undergraduate and postgraduate students working in Electronics, Microelectronics, Electrical, and Computer Engineering.

Abhijit Biswas received his B.Tech., M.Tech. and Ph.D. (Tech.) degrees from the University of Calcutta. In 1999, he joined the University of Calcutta as a lecturer in the Department of Radio Physics and Electronics where he is currently working as a Professor. He worked at Jadavpur University as a lecturer in Electronics Science during 1997–1999 and as a Reader in the Department of Electronics and Telecommunication Engineering during 2006–2008. His research interests include semiconductor physics, modeling, simulation, and characterization of electronic and optoelectronic devices including CMOSFETs, LEDs and LASER diodes, and circuits. He has published over 70 technical papers in peer-reviewed international journals.

Dr. Raghvendra Sahai Saxena received his B.E. degree in Electronics and Communication Engineering from G. B. Pant Engineering College, India, in 1997, M.Tech. degree in Microelectronics from IIT Bombay, in 2003, and a Ph.D. degree from IIT Delhi, in 2012. Since 1998, he has been associated with the Solid State Physics Laboratory, DRDO, Delhi, where he is currently heading a research group working on the development and testing of infrared detectors and their readout circuits. Dr. Sahai's research interests include infrared detectors, power electronic devices, and nanoscale VLSI devices & circuits. He has authored over ninety papers in various international refereed journals and conference proceedings. Dr. Saxena is the Editor of IETE Technical Review and SSPL’s Technical Bulletin-Crystal. Dr. Saxena is an American Society for Quality (ASQ) Certified Reliability Engineer. He is also a Fellow of IEI, India, and IETE, India.

Prof. Debashis De earned his M.Tech. from the University of Calcutta in 2002 and a Ph.D. from Jadavpur University in 2005. He is a Professor and Director in the Department of Computer Science and Engineering, West Bengal University of Technology, India, and an Adjunct Research Fellow at the University of Western Australia, Australia. He is a senior member of the IEEE, a life member of CSI, and a member of the International Union of Radio Science. His research interests include mobile cloud computing and green mobile networks. He has published over 270 papers in peer-reviewed international journals and 200 international conference papers, six research monographs, and ten textbooks. He is an Associate Editor of IEEE ACCESS journal and Editor of the Hybrid Computational Intelligence journal.