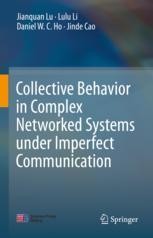 
This book will be of particular interest to the readers due to the benefits: 1) it studies the effect of time delay and quantization on the collective behavior by non-smooth analytical technique and algebraic graph theory; 2) it introduces the event-based consensus method under delayed information transmission;  In the meantime, it presents some novel approaches to handle the communication constraints in networked systems; 3) it gives some synchronization and control strategies for complex networked systems with limited communication abilities. Furthermore, it provides a consensus recovery approach for multi-agent systems with node failure. Also, it presents interesting results about bipartite consensus and fixed-time/finite-time bipartite consensus of networks with cooperative and antagonistic interactions.

Jianquan Lu received the B.S. degree in mathematics from Zhejiang Normal University, Zhejiang, China, in 2003, the M.S. degree in mathematics from Southeast University, Nanjing, China, in 2006, and the Ph.D. degree in applied mathematics from City University of Hong Kong, Hong Kong, in 2009. From 2010 to 2012, he was an Alexander von Humboldt Research Fellow in PIK, Germany. He is currently a professor at the Department of Systems Science, School of Mathematics, Southeast University, Nanjing, China. His current research interests include collective behavior in complex dynamical networks and multi-agent systems, Boolean networks, and hybrid systems. He has published over 100 papers in refereed international journals.

Lulu Li received the B.S. degree in mathematics and applied mathematics from Anhui Normal University, Wuhu, China, in 2007 and the M.S. degree in mathematics from Southeast University, Nanjing, China, in 2010 and the Ph.D. degree from City University of Hong Kong, Hong Kong, in 2013. He is currently an Associate Professor at the School of Mathematics, Hefei University of Technology, Hefei, China. His current research interests include nonlinear system, collective behavior in complex dynamical networks and multiagent systems, and stability theory.  He has published over 20 papers in refereed international journals. He was elected The ``Anhui Youth Science Award of Mathematics’’ in 2018 and, The Second Award of Jiangsu Provincial Progress in Science and Technology in 2016 as the Fifth Project Member.

Daniel W.C. Ho received the B.S., M.S., and Ph.D. degrees in mathematics from the University of Salford, Greater Manchester, U.K., in 1980, 1982, and 1986, respectively. From 1985 to 1988, he was a Research Fellow with the Industrial Control Unit, University of Strathclyde, Glasgow, U.K. In 1989, He joined City University of Hong Kong, Hong Kong. He is currently a Chair Professor in applied mathematics with the Department of Mathematics, and the Associate Dean with the College of Science.  His current research interests include control and estimation theory, complex dynamical distributed networks, multi-agent networks, and stochastic systems. He has over 250 publications in scientific journals. ​

Prof. Ho is a Fellow of the IEEE. He was honored to be the Chang Jiang Chair Professor awarded by the Ministry of Education, China, in 2012. He has been on the editorial board of a number of journals including IEEE Transactions on Neural Networks and​ Learning Systems, IET Control Theory and its Applications, Neural Networks, Journal of the Franklin Institute and Asian Journal of Control. He is named as ISI Highly Cited Researchers (2014-2020) in Engineering. ​