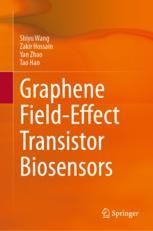 In this monograph, the graphene-based field-effect transistor (FET) biosensors are shown to be an emerging sensing platform. Divided into two parts the first set of chapters are devoted to basic knowledge of graphene, graphene FET and its biosensing. In the second part of this book the applications of graphene FET biosensors combined with various biotechnologies are presented. As well as discussing the existing technologies the authors also introduce their own ideas and concepts. Finally the remaining problems in graphene FET biosensors are discussed, along with proposed solutions and prospects for future applications. This monograph allows readers to grasp the basic knowledge and future direction of graphene-based FET biosensors.

Shiyu Wang obtained his Bachelor’s (2015), Master’s (2018), and Ph.D. (2021) degrees at Gunma University under the guidance of Haruo Kobayashi and Md. Zakir Hossain. He has five years of development experience with graphene FET biosensors. Since 2019, he has worked with graphene FET biosensors as a special researcher at the Nano-Processing Facility, National Institute of Advanced Industrial Science and Technology (AIST), Japan.
Md. Zakir Hossain received his Bachelor’s (1989) and Master’s (1990) degrees from The University of Dhaka, Bangladesh, then Master’s (1999) and Ph.D. (2002) degrees from Kyoto University under the supervision of Professor Mitsuaki Nishijima. He was a JPSP postdoctoral fellow at The University of Tokyo (2002–2004) and worked with Professor Jun Yoshinobu. After spending two years at The University of Tokyo, he moved to Professor Maki Kawai’s laboratory in RIKEN, Japan. In July 2009, he moved to Northwestern University, USA, where he worked with Professor Mark Hersam as a research scholar. After some two years in the USA, he returned to Japan and began working as a tenure-track assistant professor in Gunma University in 2011. At present, he is a professor in the Gunma University Initiative for Advanced Research (GIAR). His field of expertise is surface and interface of materials. Recently his research interests expanded to graphene-based field effect transistor (FET) biosensors. During his research career, he has published articles in many journals including Nature Chemistry, Journal of the American Chemical Society, and Biosensors and Bioelectronics.
Yan Zhao received his Bachelor’s, Master’s, and Ph.D. degrees in 1992, 1995, and 1999, respectively,  in material science and engineering at the Chinese Academy of Sciences. He has almost 30 years of experience in the field of material science. From March 1999 to February 2003, he was an associate professor at the Institute of Metal Research, Chinese Academy of Sciences, Shenyang, China. From March 2003 to December 2006, he was a visiting scholar in the Department of Chemistry, Purdue University, West Lafayette, IN, USA. From January 2007 to September 2010, he was affiliated with the Ben May Institute  for Cancer Research, the University of Chicago, Chicago, IL, USA, as a senior research associate. From October 2010 to December 2020, he worked at the Institute of Metal Research, the Chinese Academy of Sciences, Shenyang, China, as a professor. At present, he is working at the Jihua Laboratory, Foshan, Guangdong, China, as a professor. He has published more than 100 papers on material science and engineering, particularly in the application field of chitin, agar, fucoidan, alginate, carrageenan, and other marine biological materials. Yan Zhao is a committee member of the Skin and Soft Tissue Repair and Reconstruction Technology Branch, China Medicinal Biotech Association; a committee member of the Craniomaxillofacial Plastic Surgery Materials Branch, Chinese Society of Biomaterials; and a standing member of the Transdermal Drug Delivery Committee, World Federation of Chinese Medicine Societies. In 2014 he became a member of  the 10-100-1000 Program for High-End Talents Introduction (Liaoning, China); and of High-Level Talents in 2018 (Shenyang, China).

Tao Han received his Bachelor’s degree in 2008 at the China Medical University and his Master’s and Ph.D. degrees in 2010 and 2013, respectively, at the People's Liberation Army Second Military Medical University, Oncology, in China under the direction of Academician Hongyang Wang. He has more than 10 years of experience in comprehensive diagnosis and treatment of liver, gallbladder, pancreatic, and lung cancer. He worked in the Oncology Department of the All-Army Cancer Center, Northern Theater General Hospital (China), as an attending physician 2013–2020. At present, he has moved to the Department of Medical Oncology, the First Affiliated Hospital of the China Medical University. He has published more than 100 papers about oncology and other subjects. He received the award of Army Medical Achievement in 2014 and the award of Liaoning Provincial Science and Technology Progress in 2015.