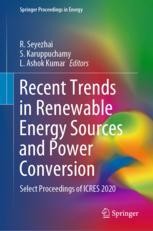 This book presents selected papers from the International Conference on Renewable Energy Systems (ICRES 2020). It throws light over the state of the art of renewable energy sources and their technological advances. Renewable energy sources discussed in this book include solar, wind,  biomass, fuel cells, hydropower , hydrogen, nuclear, and geothermal. This book comprehensively explains each of these sources, materials associated, technological development, economics and their impact on the environment. As the renewable energy sources are intermittent, they require specific power electronic converter to convert the generated power into useful form that can be used for utility. Hence, this book describes different forms of power converter such as AC-DC, DC-DC, DC-AC and AC-AC. Advanced power semiconductor devices, their gate drive and protection circuits, heat sink design and magnetic components for power converter are the additional topics included in this book. The topics covered in these proceedings will have a large impact among academicians, researchers, policy makers, scientists, practitioners and students in fields of electronics and electrical engineering, energy engineering, automotive engineering, and so on.