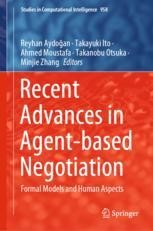 This volume comprises carefully selected and reviewed outcomes of the 12th International Workshop on Automated Negotiations (ACAN) held in Macao, 2019, in conjunction with International Joint Conference on Artificial Intelligence (IJCAI) 2019. It focuses on human aspects of automated negotiation and the recent advances in negotiation frameworks and strategies. Written by leading academic and industrial researchers, it is a valuable resource for professionals and scholars working on complex automated negotiations.

Dr. Reyhan Aydoğan is Assistant Professor in the Department of Computer Science at Özyeğin University and guest researcher in the Interactive Intelligence Group at TU Delft. She received her PhD. degree in 2011 in Computer Engineering from Boğaziçi University, Turkey, after which she joined the Interactive Intelligence Group at Delft University of Technology as a postdoctoral researcher. As a guest researcher, she visited the Center of Collective Intelligence at MIT in 2013; Intelligence Systems Group at Norwegian University of Science and Technology in 2015 and Nagoya Institute of Technology in 2017. Her research focuses on the modeling, development and analysis of intelligent agents that integrate different aspects of intelligence such as reasoning, decision making and learning. She is well-known for her research on qualitative preference modeling, automated negotiating agents and negotiation protocols. Besides autonomous agents, she also designs and develops decision support systems in particular negotiation support systems. Her aim is to support human decision makers in complex and dynamic environments, which also requires the design of effective human computer interaction (e.g. preference elicitation). Her career project is about human-robot negotiation.

Dr. Takayuki Ito is Professor in the Department of Social Informatics at Kyoto University. He received his Doctor of Engineering from Nagoya Institute of Technology, Japan in 2000. He was a JSPS research fellow, an associate professor of JAIST, and a visiting scholar at USC/ISI, Harvard University, and MIT. He received the JSAI Achievement Award, the JSPS Prize, the Fundamental Research Award of JSSST, the Prize for Science and Technology of the Commendation for Science and Technology by the Minister of Education, Culture, Sports, Science, and Technology (MEXT), the Young Scientists' Prize of the Commendation for Science and Technology by the MEXT, the Nagao Special Research Award of IPSJ, the Best Paper Award of AAMAS2006, the 2005 Best Paper Award of JSSST, and the Super Creator Award of 2004 IPA Exploratory Software Creation Project. He was a JST PREST Researcher, and a principal investigator of the Japan Cabinet Funding Program for Next Generation World-Leading Researchers. He is currently principal investigator of JST CREST project.

Dr. Ahmed Moustafa is an Associate Professor at Nagoya Institute of Technology. He received his Ph.D. in Computer Science from the University of Wollongong, Australia. He is a member of the Japan Society of Artificial Intelligence, IEEE Computer Society, Australia Computer Society, Service Science Society of Australia. He was a visiting researcher in University of Adelaide, Auckland University of Technology and Data61, Australia. His main research interests include complex automated negotiation, multiagent reinforcement learning, trust and reputation in multiagent societies, deep reinforcement learning, service oriented computing, collective intelligence, intelligent transportation systems and data mining.

Prof. Minjie Zhang received her Ph.D. from the University of New England, Australia in 1996. Dr. Zhang is a full professor, the Director of Centre for Big Data Analytics and Intelligent Systems, and the Research Chair in Computer Science and IT at the University Of Wollongong (UOW), Australia. She is the author/co-author of over 260 research papers. She has organised over 20 international workshops and conferences. As a co-editor, she has edited 14 books and 4 special issues with reputable journals. Her research interests include multi-agent systems and their applications in complex domains, distributed artificial intelligence, smart modeling and simulation in complex systems, agent-based grid/cloud computing, and smart grid systems.