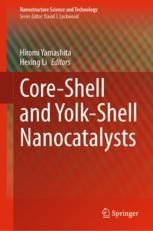 This book introduces recent progress in preparation and application of core-shell and yolk-shell structures for attractive design of catalyst materials. Core-shell nanostructures with active core particles covered directly with an inert shell can perform as highly active and selective catalysts with long lifetimes. Yolk-shell nanostructures consisting of catalytically active core particles encapsulated by hollow materials are an emerging class of nanomaterials. The enclosed void space is expected to be useful for encapsulation and compartmentation of guest molecules, and the outer shell acts as a physical barrier to protect the guest molecules from the surrounding environment. Furthermore, the tunability and functionality in the core and the shell regions can offer new catalytic properties, rendering them attractive platform materials for the design of heterogeneous catalysts. This book describes the recent development of such unique nanostructures to design effective catalysts which can lead to new chemical processes. It provides an excellent guide for design and application of core-shell and yolk-shell structured catalysts for a wide range of readers working on design of attractive catalysts, photocatalysts, and electrocatalysts for energy, environmental, and green chemical processes.

Hiromi Yamashita has been a professor at Osaka University since 2004, after receiving his Ph.D. from Kyoto University in 1987. He was an assistant professor at Tohoku University, an associate professor at Osaka Prefecture University, and an invited professor at the Pierre and Marie Curie University. He was also a visiting research fellow at the Pennsylvania State University, the University of Texas at Austin, and the California Institute of Technology. He has been an editor of Applied Catalysis B, an associate editor of the Journal of Photochemistry and Photobiology C, the president of the Catalysis Society of Japan, the president of the Asia-Pacific Association of Catalysis Societies (APACS), a professor of Elements Strategy Initiative for Catalysts and Batteries Kyoto University and a member of Academia Europea. He has received awards from the Catalysis Society of Japan, the Japanese Photochemistry Association, the Japan Society of Coordination Chemistry, the Japan Petroleum Institute, and the Japan Institute of Metals and Materials. His research interests include the design of single-site photocatalysts and nanostructured catalysts.

Hexing Li has been a professor at Shanghai Normal University since 1999 and is now the president of the Shanghai University of Electric Power. He received a Ph.D. from Fudan University in 1998. He is an invited professor at Shanghai Jiaotong University, East-China Normal University, and East-China University of Science and Technology, among others. He was also a visiting research fellow at Ball State University in the USA. He is an associate editor of Applied Catalysis B, a vice-chairman of the Photocatalysis Committee of China, and a director of the Chinese Education Ministry Key Lab and the International Joint Lab on Resource Chemistry. His research interests include the design and application of porous metal catalysts and hierarchical photocatalysts. He has published many papers in Nature, Nature Communications, Journal of the American Chemical Society, Angewandte Chemie, ACS Nano, among others. He has received science awards from the Chinese Education Ministry and the Shanghai Local Government.