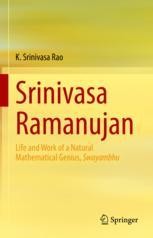 Life and Work of a Natural Mathematical Genius, Swayambhu

This book offers a unique account on the life and works of Srinivasa Ramanujan—often hailed as the greatest “natural” mathematical genius. Sharing valuable insights into the many stages of Ramanujan’s life, this book provides glimpses into his prolific research on highly composite numbers, partitions, continued fractions, mock theta functions, arithmetic, and hypergeometric functions which led the author to discover a new summation theorem. It also includes the list of Ramanujan’s collected papers, letters and other material present at the Wren Library of Trinity College, Dublin, Ireland. This book is a valuable resource for all readers interested in Ramanujan’s life, work and indelible contributions to mathematics.

K. SRINIVASA RAO is the Director (Honorary) of the Srinivasa Ramanujan Academy of Maths Talent (SRAMT), Chennai, India. Earlier, he served as Senior Professor of the Institute of Mathematical Sciences (IMSc), Chennai, India, which he joined in 1964 as a research trainee with an M.Sc. (Physics) from the University of Madras, India. Professor Rao completed his Ph.D. in Theoretical Nuclear Physics at the IMSc, Chennai, India, in 1972, under the supervision of Prof. Alladi Ramakrishnan. His research areas include quantum theory of angular momentum, special functions and orthogonal polynomials, group theory, numerical analysis and computational physics. Professor Rao’s research papers have been published in various national and international journals of repute. He is the editor and author of a number of books, including Srinivasa Ramanujan: A Mathematical Genius (1998, 2004), Quantum Theory of Angular Momentum: Selected Topics (1993), and Introduction to Computers and Programming (1974). He was an Alexander von Humboldt Foundation Fellow, a recipient of the Ramanujan Award of the Ramanujan Mathematics Academy and Mathematics Library (2013), awarded in recognition of his research on “Gauss, Ramanujan and Hypergeometric Series” and “Life and Works of Ramanujan”; the Tamilnadu National Science Academy Award (TANSA 2000) for Mathematical Sciences; the TANSA 2000 Award for Popularisation of Science; and the Lifetime Achievement Award of SRAMT, Chennai.