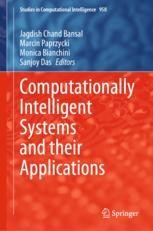 Computationally Intelligent Systems and their Applications

This book covers all core technologies like neural networks, fuzzy systems, and evolutionary computation and their applications in the systems. Computationally intelligent system is a new concept for advanced information processing. The objective of this system is to realize a new approach for analyzing and creating flexible information processing of sensing, learning, recognizing, and action taking. Computational intelligent is a part of artificial intelligence (AI) which includes the study of versatile components to empower or encourage savvy practices in intricate and evolving situations. The computationally intelligent system highly relies on numerical information supplied by manufacturers unlike AI.

Dr. Jagdish Chand Bansal is Associate Professor at South Asian University New Delhi and Visiting Faculty at Maths and Computer Science, Liverpool Hope University UK. Dr. Bansal has obtained his Ph.D. in Mathematics from IIT Roorkee. Before joining SAU New Delhi, he has worked as Assistant Professor at ABV-Indian Institute of Information Technology and Management Gwalior and BITS Pilani, India. His primary area of interest is swarm intelligence and nature-inspired optimization techniques. Recently, he proposed a fission–fusion social structure-based optimization algorithm, Spider Monkey Optimization (SMO), which is being applied to various problems from the engineering domain. He has published more than 60 research papers in various international journals/conferences. He has also received Gold Medal at UG and PG levels. Apart from SADIC, he is also Series Editor of the series Algorithms for Intelligent Systems (AIS) published by Springer. He is Editor-in-Chief of International Journal of Swarm Intelligence (IJSI) published by Inderscience. He is also Associate Editor of IEEE ACCESS (IEEE) and ARRAY (Elsevier). He is the steering committee member and the general chair of the annual conference series SocProS. He is the general secretary of Soft Computing Research Society (SCRS).

Marcin Paprzycki is Associate Professor at the Systems Research Institute, Polish Academy of Sciences. He holds an M.S. from Adam Mickiewicz University in Poznań, Poland, a Ph.D. from Southern Methodist University in Dallas, Texas, and a Doctor of Science from the Bulgarian Academy of Sciences. He is a senior member of the IEEE, a senior member of the ACM, Senior Fulbright Lecturer, and IEEE CS Distinguished Visitor. He has contributed to more than 450 publications and was invited to the program committees of over 500 international conferences. He serves on the editorial boards of 12 journals and one book series.

Monica Bianchini received the Laurea cum laude in Mathematics and the Ph.D. degree in Computer Science from the University of Florence, Italy, in 1989 and 1995, respectively. After receiving the Laurea, for two years, she was involved in a joint project of Bull HN Italia and the Department of Mathematics (University of Florence), aimed at designing parallel software for solving differential equations. From 1992 to 1998, she was a Ph.D. student and  Postdoc Fellow with the Computer Science Department of the University of Florence. Since 1999, she has been with the University of Siena, where she is currently Associate Professor at the Information Engineering and Mathematics Department. Her main research interest is in the field of artificial intelligence & applications, machine learning, with emphasis on neural networks for structured data and deep learning, approximation theory, information retrieval, bioinformatics, and image processing. M. Bianchini has authored more than seventy papers and has been Editor of books and special issues on international journals in her research field. She has been a participant in many research projects focused on machine learning and pattern recognition, founded by both Italian Ministry of Education (MIUR), and University of Siena (PAR scheme), and she has been involved in the organization of several scientific events, including the NATO Advanced Workshop on Limitations and Future Trends in Neural Computation (2001), the 8th AI*IA Conference (2002), GIRPR 2012, the 25th International Symposium on Logic Based Program Synthesis and Transformation, and the ACM International Conference on Computing Frontiers 2017. Prof. Bianchini served as Associate Editor for IEEE Transactions on Neural Networks 2003–2009), Neurocomputing (from 2002), and International Journal of Computers in Healthcare (from 2010). She is a permanent member of the Editorial Board of IJCNN, ICANN, CPR, ICPRAM, ESANN, ANNPR, and KES.