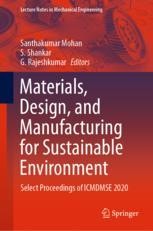 Dr. Santhakumar Mohan got his Ph.D. (Robotics and Control) from the Indian Institute of Technology Madras, Chennai (India) in 2010. From June 2010 to March 2011, he worked as an assistant professor in the Department of Mechanical Engineering at National Institute of Technology Calicut (NITC), Kerala (India). He then worked as world-class university (WCU) postdoctoral fellow at the Korean Advanced Institute of Science and Technology (KAIST), Daejeon (Republic of Korea), in addition to this, he received another prestigious Brain Korea 21 (BK21) Post-doctoral fellowship with the same institute from September 2011 to March 2012. In 2012, he joined the faculty of Mechanical Engineering at the Indian Institute of Technology Indore. He is holding visiting faculty positions at IISc Bangalore, India, RWTH Aachen, Germany and ECN, France. His active research areas include underwater vehicle and underwater manipulator design and control, parallel robotic platforms, assistive robots, field and service robots, intelligent motion control, and dynamic modeling and control of dynamic systems. Furthermore, he has received the outstanding young Scientist for the year 2014 from Korea Robotics Society, European Master on Advanced Robotics Plus (EMARO+) fellowship (2018-2019) and Alexander von Humboldt (AvH) Fellowship (2016-2017). He has published more than 100 articles in various journals and conference proceedings.
Dr. S. Shankar is currently working as a Professor at the Department of Mechatronics Engineering, Kongu Engineering College, Erode. He obtained his B.E. (Mechanical Engineering) and M.E. (Engineering Design) from Bharathiar University, Coimbatore, and Ph.D. from the Indian Institute of Technology Madras, Chennai. His major areas of research interests include Computational Mechanics, Tribology, Biomechanics, Composite Materials and Human Factors in Design. He has published 84 papers in referred international journals and more than 50 Conference publications. Dr. Shankar received the IE(I) Young Engineering Award in 2012-2013 and AICTE Career Award for Young Teachers in 2014-2015.


Dr. G. Rajeshkumar is currently an Associate Professor at the Department of Mechanical Engineering, PSG Institute of Technology and Applied Research, Coimbatore. He obtained his Bachelor of Engineering degree from Sri Ramakrishna Institute of Technology, Coimbatore in 2010 and his Master of Engineering at Kongu Engineering College, Erode in 2012 with a Gold Medal. He received his Ph.D. in Mechanical Engineering from Anna University, Chennai in 2017. His major areas of research interests include Polymer Matrix Composites, Mechanism of Needle Insertion in Soft Materials, Tribology and Vibrations. He has published about 52 articles in peer-reviewed international journals and conference proceedings, and a textbook.