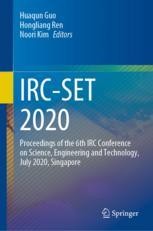 Proceedings of the 6th IRC Conference on Science, Engineering and Technology, July 2020, Singapore

This book highlights leading-edge research in multi-disciplinary areas in Physics, Engineering, Medicine, and Health care, from the 6th IRC Conference on Science, Engineering and Technology (IRC-SET 2020) held in July 2020 at Singapore. The papers were shortlisted after extensive rounds of reviews by a panel of esteemed individuals who are pioneers in their domains. The book also contains excerpts of the speeches by eminent personalities who graced the occasion, thereby providing written documentation of the event.

Dr. Huaqun Guo is currently Senior Scientist at the Institute for Infocomm Research (I2R), A*STAR Research Entities and President of International Researchers Club. Dr. Guo obtained her B.Eng and M.Eng from Tianjin University, and her M.Eng and PhD from the National University of Singapore (NUS) respectively. She was a senior engineer at Kent Ridge Digital Labs (KRDL) from October 2000 to May 2001. She was a senior research staff at NUS from June 2001 to March 2003. She was Chairperson of IEEE Singapore Women In Engineering (WIE) Affinity Group in 2011 and 2012, chairperson of IEEE Broadcast Technology Society Singapore Chapter in 2013 and 2014, and chairperson of IEEE Intelligent Transportation Systems Society Singapore Chapter in 2015, 2016, 2018, and 2019. She has published 80 papers in international journals, conferences and books. She is an editor of a book, Automotive Informatics and Communicative Systems: Principles in Vehicular Networks and Data Exchange. Her research areas include Network and Communication Security, Cyber-Physical Security, Industrial Internet of Things (IIoT) Security, Vehicular Network and Security.

Dr. Hongliang Ren received his PhD in Electronic Engineering (specialized in Biomedical Engineering) from the Chinese University of Hong Kong (CUHK) in 2008. He has navigated his academic journey through the Johns Hopkins University, Children’s Hospital Boston, Harvard Medical School, and Children’s National Medical Center, United States. He has been leading a research group on medical robotics at the National University of Singapore. His main areas of interest include biorobotics and intelligent control, medical mechatronics, soft continuum robots and sensors, and multisensory learning in surgical robotics. He is an IEEE Senior Member and currently serves as an Associate Editor for IEEE Transactions on Automation Science & Engineering (T-ASE) and Medical & Biological Engineering & Computing (MBEC). He is the recipient of NUS Young Investigator Award and Engineering Young Researcher Award, IAMBE Early Career Award 2018, Interstellar Early Career Investigator Award 2018, and ICBHI Young Investigator Award 2019.

Dr. Noori Kim is an Assistant Professor in Electrical and Electronic Engineering at Newcastle University in Singapore. She serves as a vice-chair of IEEE Singapore Women In Engineering (WIE) Affinity Group in 2020. Dr.KIM graduated with a PhD in electrical and computer engineering from the University of Illinois at Urbana-Champaign (UIUC) in 2014. KIM received her BS and MS degrees in computer science from Ewha Womans University in South Korea in 2006 and 2008. During her two years of MS degree study, she was invited to attend the Fraunhofer Institute for Computer Graphics Research IGD in Darmstadt, Germany, as a short-term visiting scholar. Her other accomplishments include research at Stanford University (Palo Alto, USA), Department of Medicine in 2007 as a visiting scholar. Dr. Kim’s general research interests include acoustics, electro-acoustics, hearing-aids, Internet of Things (IoT), transducers and sensors, embedded systems, electromagnetic systems. Her studies focus on both theoretical insights into scientific research as well as developing physical application systems.