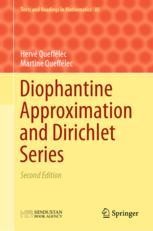 The second edition of the book includes a new chapter on the study of composition operators on the Hardy space and their complete characterization by Gordon and Hedenmalm. The book is devoted to Diophantine approximation, the analytic theory of Dirichlet series and their composition operators, and connections between these two domains which often occur through the Kronecker approximation theorem and the Bohr lift. The book initially discusses Harmonic analysis, including a sharp form of the uncertainty principle, Ergodic theory and Diophantine approximation, basics on continued fractions expansions, and the mixing property of the Gauss map and goes on to present the general theory of Dirichlet series with classes of examples connected to continued fractions, Bohr lift, sharp forms of the Bohnenblust–Hille theorem, Hardy–Dirichlet spaces, composition operators of the Hardy–Dirichlet space, and much more. Proofs throughout the book mix Hilbertian geometry, complex and harmonic analysis, number theory, and ergodic theory, featuring the richness of analytic theory of Dirichlet series. This self-contained book benefits beginners as well as researchers.

HERVÉ QUEFFELEC is Emeritus Professor at the Department of Mathematics, University of Lille, France. Earlier, he served as Full Professor at Lille 1 University, France (1992–2011) and Assistant Professor at Paris-Sud University, Orsay, France (1968–1992). He completed his Ph.D. in Mathematics in 1971 and received the habilitation à diriger des recherches (HDR) in 1985 from Paris-Sud University, France. His research interests include analytic theory of Dirichlet series, Banach spaces of analytic functions, and Carleson measures. Five students have earned their Ph.D. degrees under the Prof. Queffelec’s supervision during his academic career. He has delivered talks based on his research in renowned universities and institutes around the world, including Harish-Chandra Research Institute, India; Tsinghua University, China; University of Crete, Greece; Euler International Mathematical Institute, Russia; and Centre de Recerca Mathemàtica, Spain. He has published his research papers in several journals of repute.

MARTINE QUEFFÉLEC is Emeritus Assistant Professor at the Department of Mathematics, University of Lille, France. Earlier, she was an Assistant Professor at Lille 1 University, France, (1993–2011), and Assistant Professor at Université Sorbonne Paris Nord, France (1970–1993). She received the habilitation à diriger des recherches (HDR) in 1984 from Université Sorbonne Paris Nord, France. Her areas of research include dynamical systems and ergodic theory, Diophantine approximation and number theory, and harmonic analysis of measures. She has been an active participant of international conferences and has delivered talks in institutes around the world, including Instituto Nacional de Matemática Pura e Aplicada, Brazil; Tsinghua University, China; Research Institute for Mathematical Sciences, Kyoto University, Japan; and Harish-Chandra Research Institute, India. She has three books to her name, including Substitution Dynamical Systems: Spectral Analysis (Springer). Her research papers are published in several journals of repute.