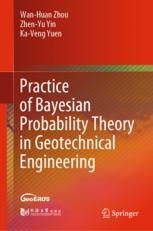 This book introduces systematically the application of Bayesian probabilistic approach in soil mechanics and geotechnical engineering. Four typical problems are analyzed by using Bayesian probabilistic approach, i.e., to model the effect of initial void ratio on the soil–water characteristic curve (SWCC) of unsaturated soil, to select the optimal model for the prediction of the creep behavior of soft soil under one-dimensional straining, to identify model parameters of soils and to select constitutive model of soils considering critical state concept. This book selects the simple and easy-to-understand Bayesian probabilistic algorithm, so that readers can master the Bayesian method to analyze and solve the problem in a short time. In addition, this book provides MATLAB codes for various algorithms and source codes for constitutive models so that readers can directly analyze and practice.
This book is useful as a postgraduate textbook for civil engineering, hydraulic engineering, transportation, railway, engineering geology and other majors in colleges and universities, and as an elective course for senior undergraduates. It is also useful as a reference for relevant professional scientific researchers and engineers.

Wan-Huan ZHOU is currently Head and Associate Professor of the Department of Civil and Environmental Engineering and Interim Director of Centre for Regional Ocean at the University of Macau. Prof. Zhou received her B.Eng. degree in 2002 and M.Sc. degree in 2005 from Zhejiang University in China and Ph.D. in Geotechnical Engineering from The Hong Kong Polytechnic University in 2008. After graduation, she worked as a Lecturer at The Hong Kong Polytechnic University and later joined the University of Macau in September 2009. She has acted as Principal Investigator on 11 research projects, including grants from the National Natural Science Foundation (NSFC) and the Macao Science and Technology Development Fund (FDCT). She has published more than 40 SCI articles as the first or correspondent author in geotechnical journals, such as Journal of Geotechnical and Geoenvironmental Engineering, ASCE and Canadian Geotechnical Journal. She won the 2011 best paper award of the International Association.

Zhen-Yu YIN is an Associate Professor of Geotechnical Engineering at The Hong Kong Polytechnic University since 2018. Dr. Yin received his BSc in Civil Engineering from Zhejiang University in 1997, followed by a 5 years engineering consultancy at the Zhejiang Jiahua Architecture Design Institute. Then, he obtained his MSc and PhD in Geotechnical Engineering at Ecole Centrale de Nantes (France) in 2003 and 2006 respectively. Then he has been working as postdoctoral researcher at Helsinki University of Technology (Finland), University of Strathclyde (Glasgow, UK), Ecole Centrale de Nantes and University of Massachusetts (Umass-Amherst, USA). In 2010 he joined Shanghai Jiao Tong University as Special Researcher and received “Professor of Exceptional Rank of Shanghai Dong-Fang Scholar”. In 2013 he joined Ecole Centrale de Nantes as Associate Professor before moving to Hong Kong. Dr. Yin has published over 160 articles in peer reviewed international journals with an H index of 35 according to Web of Science. Since 2012 he is a member of the granular materials committee of American Society of Civil Engineers.

Ka-Veng Yuen is the Dean of Graduate School and Distinguished Professor of Civil and Environmental Engineering (CEE) of the University of Macau. He received his Ph.D. in Civil Engineering from the California Institute of Technology (Caltech) after a study period of 2 years and 7 months. His major awards include Young Investigator Award, International Chinese Association on Computational Mechanics; QIAN Weichang program scholar, K.C. Wong Education Foundation; Phi-Tau-Phi Honorary member and the Housner’s Fellowship. His paper “Model selection using response measurements: Bayesian probabilistic approach” (co-authored with J.L. Beck) is one of the top 10 most cited papers among all papers published in the Journal of Engineering Mechanics (established since 1983) of the American Society of Civil Engineers. Furthermore, his single-author book “Bayesian methods for structural dynamics and civil engineering” (published by the top publisher John Wiley & Sons in 2010) has attracted great attention of Bayesian methods for structural dynamics. It has become a classical reading in this research field. His H index is 30 according to Web of Science.