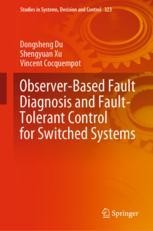 This book focuses on the fault diagnosis observer design for the switched system. Model-based fault diagnosis and fault tolerant control are one of the most popular research directions in recent decades. It contains eight chapters. Every chapter is independent in the method of observer design, but all chapters are around the same topic. Besides, in each chapter, the model description and theoretical results are firstly provided, then some practical application examples are illustrated to prove the obtained results. The advanced theoretical methodologies will benefit researchers or engineers in the area of safety engineering and the arrangement of the structure will help the readers to understand the content easily.

From 2008 to 2013, he was a Lecturer with the School of Science, Huaihai Institute of Technology. From 2015, he was an Associate Professor with the Faculty of Automation, Huaiyin Institute of Technology. From November 2016 to November 2017, he was a Visiting Scholar with Centre de Recherche en Informatique, Signal et Automatique de Lille, Polytech'Lille, France. His current research interests include fault diagnosis, fault tolerant control and switched system. Currently, he has published more than 30 papers indexed by SCI and one book in Springer Verlag.

Vincent Cocquempot was born in France, in 1966. He received the Ph.D. degree in automatic control from the Lille University of Sciences and Technologies, France, in 1993. He is currently a Professor in automatic control and computer science with the IUTA (Technological Institute), Lille University, and a Researcher with CRIStAL UMR CNRS 9189 (Research Center in Computer Science, Signal and Automatic Control of Lille), University of Lille, France. His research interests include robust on-line fault diagnosis for uncertain dynamical nonlinear systems, fault detection and isolation, and fault tolerant control for hybrid dynamical systems.