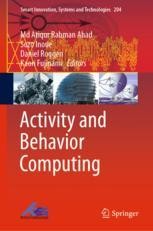 Focusing on the vision-based and sensor-based recognition and analysis of human activity and behavior, this book gathers extended versions of selected papers presented at the International Conference on Activity and Behavior Computing (ABC 2020), held in Kitakyushu, Japan on August 26 – 29, 2020. The respective chapters cover action recognition, action understanding, gait analysis, gesture recognition, behavior analysis, emotion and affective computing, and related areas. The book addresses various challenges and aspects of human activity recognition in both the sensor-based and vision-based domains, making it a unique guide to the field.

Sozo Inoue, Ph.D., is a Professor in Kyushu Institute of Technology, Japan. His research interests include human activity recognition with smart phones and healthcare application of web/pervasive/ubiquitous systems. Currently, he is working on verification studies in real field applications, and collecting and providing a large-scale open dataset for activity recognition, such as a mobile accelerator dataset with about 35,000 activity data from more than 200 subjects, nurses’ sensor data combined with 100 patients’ sensor data and medical records, and 34 households’ light sensor dataset for 4 months combined with smart meter data. Inoue has a Ph.D. of Engineering from Kyushu University in 2003. After completion of his degree, he was appointed as an Assistant Professor in the Faculty of Information Science and Electrical Engineering at the Kyushu University, Japan. He then moved to t the Research Department at the Kyushu University Library in 2006. Since 2009, he is appointed as an Associate Professor in the Faculty of Engineering at Kyushu Institute of Technology, Japan, and moved to Graduate School of Life Science and Systems Engineering at Kyushu Institute of Technology in 2018. Meanwhile, he was a Guest Professor in Kyushu University, a Visiting Professor at Karlsruhe Institute of Technology, Germany, in 2014, a special Researcher at Institute of Systems, Information Technologies and Nanotechnologies (ISIT) during 2015–2016, and a Guest Professor at the University of Los Andes in Colombia in 2019. He is a Technical Advisor of Team AIBOD Co. Ltd. since 2017 and a Guest Researcher at RIKEN Center for Advanced Intelligence Project (AIP) since 2017. He is a member of the IEEE Computer Society, the ACM, the Information Processing Society of Japan (IPSJ), the Institute of Electronics, Information and Communication Engineers (IEICE), the Japan Society for Fuzzy Theory and Intelligent Informatics, the Japan Association for Medical Informatics (JAMI), and the Database Society of Japan (DBSJ).

Daniel Roggen, Ph.D., received the master’s and Ph.D. degrees from the École Polytechnique Fédérale de Lausanne, Switzerland, in 2001 and 2005, respectively. He is currently an Associate Professor with the Sensor Technology Research Centre, University of Sussex, where he leads the Wearable Technologies Laboratory and directs the Sensor Technology Research Centre. His research focuses on wearable and mobile computing, activity and context recognition, and intelligent embedded systems. He has established a number of recognized datasets for human activity recognition from wearable sensors, in particular the opportunity dataset. He is a member of Task Force on Intelligent Cyber-Physical Systems of the IEEE Computational Intelligence Society.

Kaori Fujinami, Ph.D. received his B.S. and M.S. degrees in Electrical Engineering and his Ph.D. in Computer Science from Waseda University, Japan, in 1993, 1995, and 2005, respectively. From 1995 to 2003, he worked for Nippon Telegraph and Telephone Corporation (NTT) and NTT Comware Corporation as a Software Engineer and Researcher. From 2005 to 2006, he was a Visiting Lecturer at Waseda University. From 2007 to 2017, he was an Associate Professor at the Department of Computer and Information Sciences at Tokyo University of Agriculture and Technology (TUAT). In 2018, he became a Professor at TUAT. His research interests are machine learning, activity recognition, human–computer interaction, and ubiquitous computing. He is a member of IPSJ, IEICE, and IEEE.