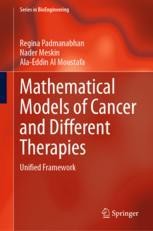 This book provides a unified framework for various currently available mathematical models that are used to analyze progression and regression in cancer development, and to predict its dynamics with respect to therapeutic interventions. Accurate and reliable model representations of cancer dynamics are milestones in the field of cancer research. Mathematical modeling approaches are becoming increasingly common in cancer research, as these quantitative approaches can help to validate hypotheses concerning cancer dynamics and thus elucidate the complexly interlaced mechanisms involved. Even though the related conceptual and technical information is growing at an exponential rate, the application of said information and realization of useful healthcare devices are lagging behind.
In order to remedy this discrepancy, more interdisciplinary research works and course curricula need to be introduced in academic, industrial, and clinical organizations alike. To that end, this book reformulates most of the existing mathematical models as special cases of a general model, allowing readers to easily get an overall idea of cancer dynamics and its modeling. Moreover, the book will help bridge the gap between biologists and engineers, as it brings together cancer dynamics, the main steps involved in mathematical modeling, and control strategies developed for cancer management. This also allows readers in both medical and engineering fields to compare and contrast all the therapy-based models developed to date using a single source, and to identify unexplored research directions.

Show all
About the authors
Dr. Regina Padmanabhan received her M.Tech. and Ph.D. degrees in Electrical Engineering from the National Institute of Technology, Calicut, India, and Qatar University, Qatar, in 2009 and 2019, respectively. She also holds a diploma in Medical Electronics from MPT, Vadakara, India. Her research interests include decision support and closed-loop control for intensive care unit sedation, optimal control, adaptive control, reinforcement learning-based control, cancer dynamics, drug dosing control for ICU sedation and cancer chemotherapy, and mathematical modeling of cancer dynamics. She has five years of experience in teaching undergraduate students of Electronics and Communication Engineering and seven years of experience as a Research Assistant at Qatar University (2012–2019).
Dr. Nader Meskin received his B.Sc. from Sharif University of Technology, Tehran, Iran, in 1998, his M.Sc. from the University of Tehran in 2001, and his Ph.D. in Electrical and Computer Engineering from Concordia University, Montreal, Canada, in 2008. He was a Postdoctoral Fellow at Texas A&M University at Qatar from January 2010 to December 2010. He is currently an Associate Professor at Qatar University, Doha, and an Adjunct Associate Professor at Concordia University. He has published more than 210 refereed journal and conference papers. His research interests include fault detection and isolation, mathematical modeling of cancer dynamics,  active control for clinical pharmacology, and multiagent systems.

Dr. Ala-Eddin Al Moustafa is a Professor at the College of Medicine, Qatar University (QU), and an associate member of QU’s Biomedical Research Center. In addition, he is still affiliated with his previous institution, the Oncology Department/Faculty of Medicine of McGill University, Canada, as an Adjunct Professor. Dr. Al Moustafa has been a Cancer Scientist since completing his Master's and Ph.D. at the University of Paris XIII, France in 1992. He completed his training as a Postdoctoral Fellow in Montreal, Canada. Afterward, Dr. Al Moustafa held a position as a PI and an Assistant Professor at the Lady Davis Institute (LDI) for Medical Research of JGH and the Oncology Department of McGill University, respectively. In addition, he was the Founder and Scientific Director of the first Cancer Research Centre in Aleppo, Syria. Dr. Al Moustafa has published more than one hundred papers, books, and book chapters on diverse aspects of human cancer including oncogene cooperation, cDNA and tissue microarray, HPVs, and EBV. In the course of his career, Dr. Al Moustafa has obtained several grants from highly respected organizations in France, Canada, and Qatar, such as the French Muscular Dystrophy Association, the Canadian Institutes of Health Research (CIHR), the Cancer Research Society, the Colorectal Cancer Association of Canada and Qatar National Research Fund. Moreover, he founded the Middle Eastern Association of Cancer Research (MEACR) and its official scientific peer-reviewed journal, the Clinical Cancer Investigation Journal (CCIJ).