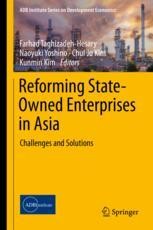 This book analyzes state-owned enterprises (SOEs), which are still significant players in many Asian economies. They provide essential public services, build and operate key infrastructure, and are often reservoirs of public employment. Their characteristics and inherent competitive advantages as publicly owned enterprises allow them to play these critical roles. Their weaknesses in governance and inefficiencies in incentive structures, however, also often lead to poor performance.

SOEs must be efficient, transparent, and accountable to level the playing field for private companies, secure the growth of a vibrant private sector, and achieve sustained and inclusive economic growth. This book analyzes the reform of SOEs in Asia, the results of which are mixed.

The volume concludes that some key conditions generally need to be met for SOE reforms to be successful: national bureaucracies must have the capacity to implement the reforms, and adverse impacts on international trade and investment must be avoided.

Dr. Farhad Taghizadeh-Hesary is an associate professor of economics at Tokai University in Japan, and a visiting professor at Keio University, Japan. He completed his master’s degree in energy economics from Tehran University, Iran, in 2011 and subsequently obtained a Ph.D. in energy economics from Keio University in 2015 with a scholarship from the government of Japan (MEXT). He taught as an assistant professor at Keio following the completion of his Ph.D. until March 2018 and teaching as an assistant professor at the faculty of political science and economics of Waseda University 2018-2020. He is a grantee of the Excellent Young Researcher (LEADER) status from the Ministry of Education, Culture, Sports, Science, and Technology (MEXT) of Japan with a 5 years’ competitive research grant (2019-2024).Dr. Taghizadeh-Hesary was visiting scholar, visiting professor and visiting fellow at several institutions and universities such as the Institute of Energy Economics of Japan (IEEJ) (2013–2015); the Credit Risk Database (CRD) association of Japan (2014–2015); Graduate School of Economics of the University of Tokyo (2016–2017), Griffith University, Australia (2019); The University of Tasmania, Australia (2019). Dr. Taghizadeh-Hesary has published on a wide range of topics, including energy economics, energy policy, green finance, small and medium-sized enterprises finance, monetary policy, and banking. Currently, he is serving as Associate Editor of Finance Research Letters (SSCI) and Associate Editor of Singapore Economic Review (SSCI). He has guest-edited special issues for prestigious journals including Energy Policy, Energy Economics, Finance Research Letters, The Singapore Economic Review, International Review of Economics and Finance, Economic Analysis and Policy, Journal of Economic Integration and Frontiers in Energy Research.  His research credits include authoring more than 80 academic journal papers and book chapters and the editing of six books. His most recent book is the “Handbook of Green Finance: Energy Security and Sustainable Development” (With Jeffery D. Sachs, Wing Thye Woo and Naoyuki Yoshino) (Springer: 2019). Dr. Taghizadeh-Hesary led, managed and has been involved in dozens of research, capacity building and training (CBT) and consulting projects on energy, economic and financial related topics for international organizations, development banks, and governments of various countries.

Dr. Naoyuki Yoshino is Professor Emeritus of Keio University in Tokyo, Japan and Director of Financial Research Center (FSA Institute, Government of Japan). He obtained a PhD in economics from Johns Hopkins University in 1979 (where his thesis supervisor was Sir Alan Walters (UK Prime Minister Margaret Thatcher’s Economic Adviser)). He taught as assistant professor at the State University of New York at Buffalo, He was a visiting scholar at MIT (USA), visiting scholar at the Central Bank of Japan, visiting professor at the University of New South Wales (Australia), Fondation Nationale des Sciences Politiques (France). He received Honorary Doctorates from Univ. of Gothenburg (Sweden) and Martin Luther University of Halle-Wittenberg (Germany). He also conferred Fukuzawa award from Keio University for his contribution to research. He was the Dean/CEO of the Asian Development Bank Institute (ADBI) in Tokyo (2014-2020).

Mr. Chul Ju Kim is Deputy Dean (CBT and Special Activities) of the Asian Development Bank Institute (ADBI). A national of the Republic of Korea, Chul Ju Kim was a secretary to the country’s President for economic and financial affairs before joining ADBI. For more than 30 years, he has been a key policy maker, dealing with a wide range of macroeconomic, financial, and social issues. He was deputy minister for planning and coordination, director general of the Economic Policy Bureau, and director general of the Public Policy Bureau, Ministry of Strategy and Finance. He also has extensive experience in international development, specifically at the World Bank and the Asian Development Bank. He holds a BA in economics from Seoul National University, Republic of Korea, and an MS in finance from Georgia State University, USA.

Mr. Kunmin Kim is Deputy Director of Public Institutions Reform Division at Ministry of Economy and Finance-Korea and in charge of management policies for SOEs and public institutions. He has studied National Graduate institution for Policy Studies (Master’s Degree) and Waseda University (Ph.D. Program). He has working experiences at ADBI as a Task Manager for policy capacity building & training program. His Korean government career encompasses both industrial and corporate policies.