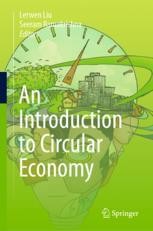 An Introduction to Circular Economy

This book is purposefully styled as an introductory textbook on circular economy (CE) for the benefit of educators and students of universities. It provides comprehensive knowledge exemplified by practices from policy, education, R&D, innovation, design, production, waste management, business and financing around the world. The book covers sectors such as agriculture/food, packaging materials, build environment, textile, energy, and mobility to inspire the growth of circular business transformation. It aims to stimulate action among different stakeholders to drive CE transformation. It elaborates critical driving forces of CE including digital technologies; restorative innovations; business opportunities & sustainable business model; financing instruments, regulation & assessment and experiential education programs. It connects a CE transformation for reaching the SDGs2030 and highlights youth leadership and entrepreneurship at all levels in driving the sustainability transformation.

Dr. Lerwen Liu is a strong advocate of sustainability through innovation & entrepreneurship education and training focusing in the Asian region.  She is a senior advisor in King Mongut's University of Technology Thonburi (KMUTT) in Bangkok playing a leadership role in 1) streamlining strategy of education, research & innovation and social impact toward sustainable development goals, industry 4.0 and circular economy, 2) building strategic partnerships with the United Nations, Asian Development Bank, leading universities, government funding agencies and industries worldwide in developing solutions for reaching SDGs and circular economy, and 3) conducting strategic training to KMUTT students and staff preparing the change agents/leaders for the SDGs 2030 and circular economy through her STEAM program.

She pioneered education programs of innovation & entrepreneurship toward sustainability, SDGs & circular economy in National University of Singapore (NUS), Yale-NUS College and KMUTT.  She has organized various platform events in partnership with the UN, ADB , World Bank and other entrepreneurship related organizations in driving youth leadership and entrepreneurship towards SDGs and Circular Economy through the adoption of STEM knowledge, and Industry 4.0.

Professor Seeram Ramakrishna, FREng is the Chair of Circular Economy Taskforce and top four authors at the National University of Singapore (NUS), which is ranked among the world’s top 10 engineering and technology universities.  He is a member of Enterprise Singapore (the Standards Agency of Singapore Government) NMC on ISO/TC323 on Circular Economy; and Standards Development Organization, Singapore Manufacturing Federation.  He is an advisor to the National Environmental Agency’s CESS events. He is the Editor-in-Chief of Springer NATURE Journal Materials Circular Economy. His senior academic leadership roles include NUS University Vice-President (Research Strategy); Dean of NUS Faculty of Engineering; Director of NUS Enterprise; and Founding Chairman of Solar Energy Institute of Singapore.  He is an elected Fellow of UK Royal Academy of Engineering (FREng); Singapore Academy of Engineering; Indian National Academy of Engineering; and ASEAN Academy of Engineering & Technology.  He received PhD from the University of Cambridge, UK; and the TGMP from the Harvard University, USA. He is named among the World’s Most Influential Minds by Thomson Reuters, and the Top 1% Highly Cited Researchers in Materials Science and Cross-Field by Clarivate Analytics. Microsoft Academic placed among the top 36 salient authors out of three million researchers worldwide. He teaches ME6501 Materials and Sustainability course. He also mentors ISD5102 projects on reimagining and enhancing the circularity of Industrial Estates. He is a judge for the Mohammed Bin Rashid Initiative for the Global Prosperity. He is an advisor to the Singapore company TRIA which specializes in zero waste packaging via biodegradable plastics.