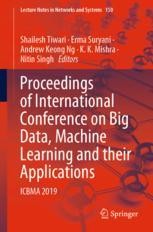 Proceedings of International Conference on Big Data, Machine Learning and their Applications

This book contains high-quality peer-reviewed papers of the International Conference on Big Data, Machine Learning and their Applications (ICBMA 2019) held at Motilal Nehru National Institute of Technology Allahabad, Prayagraj, India, during 29–31 May 2020. The book provides significant contributions in a structured way so that prospective readers can understand how these techniques are used in finding solutions to complex engineering problems. The book covers the areas of big data, machine learning, bio-inspired algorithms, artificial intelligence and their applications.

Prof. Shailesh Tiwari, Ph.D. currently works as a Director, ABES Engineering College, Ghaziabad, UP, India. He is an alumnus of Motilal Nehru National Institute of Technology Allahabad, India and having more than 20 years of experience in Teaching, Research and Administration. His primary areas of research are software testing, implementation of optimization algorithms and machine learning techniques in various engineering problems. He has published more than 90 publications in International Journals and in Proceedings of International Conferences of repute. He has edited special issues of several SCOPUS, SCIE and E-SCI-indexed journals. He has also edited several books published by Springer Nature. He has published 4 Indian patents as IPRs. He has organized several international conferences under the banner of IEEE, ACM and Springer. He is a Senior Member of IEEE, member of IEEE Computer Society, Fellow of Institution of Engineers (FIE). He is also a member of IEEE Computer Society- TCCC, TCSE, TCDE, TCSysE, IEEE Computer Society Test Technology Technical Council.

Dr. Andrew Keong Ng is an Associate Professor with Singapore Institute of Technology. He is the Deputy Programme Director of the BEng (Honours) and MEngTech programmes in Sustainable Infrastructure Engineering (Land), which focus on railway engineering and total preventive maintenance. He is a Chartered Engineer with the UK Engineering Council and serves on the committees of various local and international professional engineering institutions, such as Institute of Electrical and Electronics Engineers (IEEE), Institution of Engineers Singapore (IES), Institution of Engineering and Technology (IET), and Institution of Railway Signal Engineers (IRSE). He is a Senior Member of IEEE and IES, as well as a Consultant and Advisor to startups and multinational corporations. In addition, Dr. Ng is a Principal Investigator of several grants amounting to more than SGD 500,000. He holds one international patent and has over 20 publications as both first and corresponding author. His research and development innovations have also garnered him several prestigious awards, such as Outstanding Researcher Award, Teaching Excellence Award, Amity Researcher Award, Young Investigator Award, and National Instruments Editor’s Choice Engineering Impact Award. Furthermore, Dr. Ng has been frequently quoted and interviewed by news media on railway transportation issues and current affairs. He has also been a keynote and an invited speaker at various international conferences.

Dr. Erma Suryani received her B.Sc. and M.T. degrees from the Institut Teknologi Sepuluh Nopember (ITS), Indonesia, in 1994 and 2001, respectively. She obtained her Ph.D. degree from the National Taiwan University of Science and Technology (NTUST), Taiwan, in 2010. She has been working as a Professor at the Institut Teknologi Sepuluh Nopember (ITS), Indonesia, since 2005. Her current research interests are model-driven decision support systems, supply chain management, operation research, system dynamics with their applications in infrastructure, food and agriculture, sustainable transport, health and medicine, e-business, manufacturing and services.

Dr. Krishn Kumar Mishra is currently working as an Assistant Professor, Department of Computer Science and Engineering, Motilal Nehru National Institute of Technology Allahabad, India. He has also been worked as Visiting Faculty in the Department of Mathematics and Computer Science, University of Missouri, St. Louis, USA. His primary area of research includes evolutionary algorithms, optimization techniques and design and analysis of algorithms. He has also published more than 50 publications in international journals and in proceedings of internal conferences of repute. He is serving as a programme committee member of several conferences and also edited Scopus and SCI-indexed journals. He is also member of reviewer board of Applied Intelligence Journal, Springer.

Dr. Nitin Singh is currently working as an Associate Professor in the Department of Electrical Engineering, MNNIT Allahabad, Prayagraj, India. He is an alumnus of Motilal Nehru National Institute of Technology Allahabad, India. His primary areas of research are power system planning, electricity markets, artificial intelligence, implementation of optimization algorithms and machine learning techniques for power system optimization. He has published more than 45 publications in international journals and in proceedings of international conferences of repute. He is serving as reviewer of several Scopus, SCI and E-SCI-indexed journals. He has organized several international conferences under the banner of IEEE and Springer. He is member of IEEE, member of IEEE Computational Intelligence Society, Power Energy Society, and Industrial Application society. He is currently serving as Secretary, IEEE Joint Chapter of Industrial Electronics/ Power Electronics /Control System at MNNIT Allahabad.