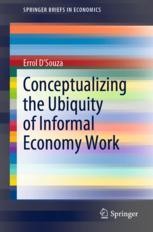 Another striking feature of such economies which the book engages with is that, as they have liberalized, informal employment in the registered enterprises or formal part of the economy has grown. The informal sector has been analyzed by recourse to two major approaches. One is a public economics framework that underlines how informal enterprises evolve as they trade-off reduced access to public services such as contract enforcement with the payment of taxes and regulatory compliances. This book extends this literature by focusing on the access to formal sector credit and its potential for financing productive enterprises as a factor that is considered when an enterprise contemplates whether to incorporate or not.

The second leg of the literature takes a labour perspective and emphasizes mandated labour costs such as hiring and firing costs, benefits, and minimum wages as considerations when deciding on whether to engage labour on a formal or informal basis. The book broadens this literature by taking into account how the human capital of workers and the monitoring costs of ensuring that workers are adhering to the terms of negotiated contracts inform the decision with regard to informality. The book will resonate with those academics and policy makers who are engaged with the conundrums of development.

Errol D’Souza is Professor of Economics and Director, Indian Institute of Management Ahmedabad. He obtained his Ph.D. as a University Grants Commission National Research Fellow from the Jawaharlal Nehru University, New Delhi. He has held appointments such as the IFCI Chair Professor at the University of Mumbai, India Chair Professor at the University Sciences Po in Paris, as a Visiting Professor of the Indian Institute of Advanced Study, Shimla, as an Honorary Senior Fellow of the Institute of South Asian Studies at the National University of Singapore, a Visiting Scholar at Columbia University, and as a Visiting Professor at the Turin School of Development of the ILO. He has worked on academic committees of the University Grants Commission and the Indian Council of Social Science Research, and has been associated with the Planning Commission of India and the Reserve Bank of India in various capacities, including as a Member, Technical Advisory Committee on Monetary Policy. He has served on the Academic Councils of the Tata Institute of Social Sciences, Indira Gandhi Institute of Development Research, the Institute for Human Development, Delhi, and is on the Advisory Board of the International Centre for Development and Decent Work at Kassel, Germany, and the Boards of the National Institute of Public Finance and Policy, and India Gold Policy Centre.  Professor D’Souza is on the editorial board of the Journal of Quantitative Economics (Springer), the Indian Journal of Labour Economics (Springer). His areas of research interest are macroeconomics, development finance and public policy.

“Errol D’Souza’s book on informal work in emerging economies, especially India, is an important new arrival for our shelves. The informal economy has been of interest to economists since the early work of Arthur Lewis, but many open questions remain, such as why the informal sector has remained so large, contrary to what the early writings predicted. D’Souza’s book brings theory and evidence to bear on these themes, including, somewhat prophetically, on what has acquired great urgency in India today, namely, the challenge of the vast migrant labor market. I would expect the book to be of wide interest to students of economics.”

“When we talk in terms of grand abstractions like the Indian Economy or India’s GDP or its growth rate, what is often forgotten is that more than three-quarters of Indians in the labour force are self-employed in the informal sector. Yet, the standard development framework focuses mainly on wage employment when talking about labour markets and not at self-employment. This masterly book by Errol D’Souza provides an analytical framework that locates the problem of development as a process of transition from self-employment to wage work, identifying the roles of market frictions as well as distortions stemming from regulation on the one hand as well as the changing nature of technology and human capital accumulation as dynamic forces driving it. It is a must-read book that provides a granular view of the development process of the Indian economy, deftly weaving theory, evidence, and policy debates, with a clarity that is truly impressive.”

“This excellent volume combines economic theory with an empirical knowledge of market structures in India and elsewhere to provide insights into the nature and evolution of informality. It will be valuable to analysts of jobless growth, and will provide policy advisers with ideas on how to address a major issue of our time—the ubiquity of informality.”

“In this book, Errol D’Souza provides an interesting, well-researched perspective on a very critical issue in development – informal employment. He analyses informal working conditions and bargaining power of informal workers on the one hand, and the interlinkages between formal and informal employment, on the other. D’Souza moves from the micro economics of informal labour contracts and non-implementation of labour standards to macroeconomic issues of job-less growth in the Indian context, with lucidity and simplicity.  Addressing the many different dimensions of informality in a developing economy context, the book makes a very important contribution to our understanding of labour markets and development processes.” Sukti Dasgupta