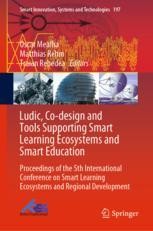 This book presents papers from the 5th International Conference on Smart Learning Ecosystems and Regional Development, which promotes discussions on R&D work, policies, case studies, entrepreneur experiences, with a particular focus on understanding the relevance of smart learning ecosystems for regional development and social innovation, and how the effectiveness of the relation of citizens and smart ecosystems can be boosted. The book explores how technology-mediated instruments can foster citizens’ engagement with learning ecosystems and territories, providing insights into innovative human-centric design and development models/techniques, education/training practices, informal social learning, innovative citizen-driven policies, and technology-mediated experiences and their impact. As such, it will inspire the social innovation sectors and ICT, as well as economic development and deployment strategies and new policies for smarter proactive citizens.

Óscar Mealha is an Associate Professor at the Department of Communication and Art, University of Aveiro, Portugal. He develops his research in the area of “Information and Communication in Digital Platforms” in the context of “Knowledge Media and Connected Communities” with several projects, masters and doctoral supervisions, and publications on interaction design and analysis techniques and methods, namely for UX design and evaluation, usability evaluation, and visualization of interaction/infocommunication activity.He is involved in infocommunication mediation projects such as “Unified Communication & Collaboration” with IT companies, “Visualization of Open Data Dashboards for Citizen Engagement and Learning” in municipalities and smart territories, and “Knowledge Interface School-Society (KISS)” with school clusters within the scientific network ASLERD. He is Director of the Doctoral Program on Information and Communication in Digital Platforms, a joint program of the University of Aveiro and University of Porto, 2014; co-Founder and member of the Scientific Committee of the Doctoral Program on Information and Communication in Digital Platforms, 2008; and was the elected Dean at the Department of Communication and Art, University of Aveiro, 2005–2011.
Dr. Matthias Rehm received his Diploma and Doctoral degrees (with honors) in 1998 and 2001, respectively, from the Bielefeld University in Germany. In 2008, he successfully completed his habilitation process in Informatics at the University of Augsburg in Germany. He is the Head of the Human–Machine Interaction Group in the Department of Architecture, Design, and Media Technology and will be leading the upcoming cross-departmental Human Centered Robot Interaction Lab at the Technical Faculty of IT and Design at Aalborg University. His research is focused on modeling social, affective, and cultural aspects of everyday behavior for intuitive human–machine interactions. He has over 100 peer-reviewed publications in the area of robotics, HCI, technology-enhanced learning, multimodal interaction, and culture-aware technology. In 2010, he became founding and steering group member of Aalborg University’s cross-departmental robotics program Aalborg U Robotics. In 2014, he co-founded an international, Canadian-based startup that is actively pushing the limits in smart learning technologies. In 2015, he was elected Vice President for the International Association for Smart Learning Ecosystems and Regional Development.

Traian Rebedea [M] (700+ citations, h-index 14) holds a Ph.D. (since 2012, highest degree) from University Politehnica of Bucharest with a thesis focusing on discourse analysis for Computer-Supported Collaborative Learning (CSCL) multi-party dialogues. After completing his thesis, Traian has continued his work as a teacher and researcher, but has also engaged in several industrial research projects on opinion mining, social media analytics, people search, and conversational agents together with companies such as Teamnet, 3Desk Ltd, and Autonomous Systems. He has vast experience in national and international R&I projects (PNIII Text2NeuralQL, POC D IAVPLN, H2020 SWARMs, H2020 RAGE, FP7 LTfLL, FP7 ERRIC and CNCSIS K-TEAMS, plus 2 start-up EC-funded accelerator grants with the start-up Wholi by 3Desk Ltd), including leading 3 projects (PNIII Text2NeuralQL, POC D IAVPLN, and one EC accelerator grant). He has also published more than 100 published papers, including top-tier conferences (EMNLP, COLING, CSCL, AIED, ICTAI, CICLING, ICALT), and journals (ijCSCL, Natural Language Engineering, Creativity Research Journal). Currently, Traian is an Associate Professor at the Computer Science Department in University Politehnica of Bucharest, teaching algorithm design, information retrieval, and machine learning, and a researcher cooperating with several companies in machine learning, NLP, and data analytics. Since 2010, he has been an expert appointed by the Romanian Authority for R&I within the FP7 and H2020 ICTC committee.