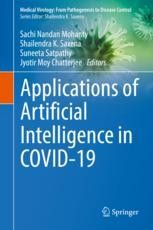 Applications of Artificial Intelligence in COVID-19

Prof.Dr.Sachi Nandan Mohanty received his Ph.D. from the Indian Institute of Technology Kharagpur in 2015, and is currently an Associate Professor at the Department of Computer Science & Engineering at the ICFAI Foundation for Higher Education Hyderabad. His research areas include data mining, big data analysis, cognitive science, fuzzy decision-making, brain-computer interface, and computational intelligence. Prof. Mohanty is a reviewer for various respected journals.

Prof. (Dr.) Shailendra K. Saxena is the Vice Dean and a Professor at King George's Medical University, Lucknow. His primary research interest is investigating the molecular mechanisms of host defense during human viral infections in order to develop predictive, preventive and therapeutic strategies against these diseases. He has received young scientist awards, and the BBSRC India Partnering Award and was named the Global Leader in Science by The Scientist magazine (USA). He has been elected a Fellow of The Academy of Environmental Biology, India (FAEB), and the Indian Virological Society (FIVS). He was also the recipient of the Dr. JC Bose National Award from the Department of Biotechnology (Govt. of India).

Dr.Suneeta Satpathy received her Ph.D. from Utkal University, Bhubaneswar, Odisha. She is currently an Associate Professor at the Department of Computer Science & Engineering at the College of Engineering Bhubaneswar. Her research interests include computer forensics, cyber security, data fusion and decision mining. She is an editorial board member and reviewer for several journals including the Journal of Engineering Science, Advancement of Computer Technology and Applications, and Robotics and Autonomous Systems.