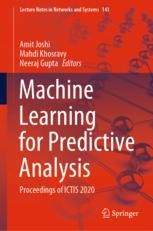 Amit Joshi is currently the Director of Global Knowledge Research Foundation and also an Entrepreneur  Researcher who has completed his Masters and research in the areas of cloud computing and cryptography in medical imaging. Dr. Joshi has an experience of around 10 years in academic and industry in prestigious organizations. Dr. Joshi is an active member of ACM, IEEE, CSI, AMIE, IACSIT, Singapore, IDES, ACEEE, NPA and many other professional societies. Currently, Dr. Joshi is the International Chair of InterYIT at International Federation of Information Processing (IFIP, Austria). He has presented and published more than 50 papers in national and international journals/conferences of IEEE and ACM. Dr. Joshi has also edited more than 40 books which are published by Springer, ACM and other reputed publishers. Dr. Joshi has also organized more than 50 national and international conferences and programs in association with ACM, Springer and IEEE to name a few across different countries including India, UK, Europe, USA, Canada, Thailand, Egypt and many more.

Neeraj Gupta received his Diploma in Environmental and Pollution Control, Civil Engineering in 1999, Bachelor of Engineering (B.E.) in Electrical and Electronics Engineering in 2003, Master of Technology (M.Tech.) in Engineering Systems in 2006, and his Ph.D. in Electrical Engineering from the Indian Institute of Technology (IIT), Kanpur, India, in 2013. He was a Postdoctoral Fellow (Sr. Project Engineer) at the Indian Institute of Technology (IIT) Jodhpur, India, for one year (June 2012–May 2013), and was a member of the faculty at the System Engineering Department of the same institute from 2013 to 2014. He then became an Assistant Professor at the Department of Applied IT Machine Intelligence and Robotics at the University for Information Science and Technology, Ohrid, Macedonia, from 2014 to 2017. Currently, he is an Assistant Professor at the School of Engineering and Computer Science, Oakland University, USA.