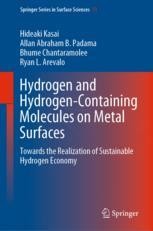 Towards the Realization of Sustainable Hydrogen Economy

This book is dedicated to recent advancements in theoretical and computational studies on the interactions of hydrogen and hydrogenated molecules with metal surfaces. These studies are driven by the development of high-performance computers, new experimental findings, and the extensive work of technological applications towards the realization of a sustainable hydrogen economy. Understanding of the elementary processes of physical and chemical reactions on the atomic scale is important in the discovery of new materials with high chemical reactivity and catalytic activity, as well as high stability and durability. From this point of view, the book focuses on the behavior of hydrogen and hydrogenated molecules on flat, stepped, and reconstructed metal surfaces. It also tackles the quantum mechanical properties of hydrogen and related adsorbates; namely, molecular orbital angular momentum (spin) and diffusion along the minimum potential energy landscape on metal surfaces. All of these  profoundly influence the outcomes of (1) catalytic reactions that involve hydrogen; (2) hydrogen storage in metals; and (3) hydrogen purification membranes. Lastly, it surveys the current status of the technology, outlook, and challenges for the long-desired sustainable hydrogen economy in relation to the topics covered in the book.

Professor Hideaki Kasai is currently serving as the president of the National Institute of Technology, Akashi College in Hyogo, Japan. He is also a professor emeritus at Osaka University in Osaka, Japan. During his long and multi-awarded career as a professor at Osaka University, he has published more than 450 peer-reviewed works in reputable scientific journals and been granted 21 patents. Among his most notable contributions to science are his pioneering works on ultrafast-quantum dynamical and elementary excitation processes on surfaces and interfaces, quantum-based designs of nanomaterials and heavy fermions systems. He currently holds several key positions in the government and scientific organizations. He is currently a scientific adviser to the Supreme Court of Japan; advisory board member of the Institute of Solid State Physics Supercomputer; member of the editorial board of the Journal of Physics: Condensed Matter by the Institute of Physics; council member of Physical Society of Japan; and member of the editorial board of the Computational Materials Science.Dr. Allan Abraham B. Padama is Associate Professor in the Institute of Mathematical Sciences and Physics at the University of Philippines Los Banos, Philippines where he has been a faculty member since 2014. He completed his BS Physics for Teachers degree at Philippine Normal University – Manila in 2004. He earned his Master of Engineering and Ph.D. Engineering degrees at the Department of Applied Physics, Osaka University, Japan in 2011 and 2014, respectively. His research activities and scientific publications are focused on gas – surface reactions and on different processes occurring on surfaces facilitated by the presence of adsorbates. He is also interested in designing materials for energy and environment related applications. He performs first principles calculations based on density functional theory in his investigations.

Dr. Ryan L. Arevalo is currently a Balik Scientist Program grantee of the Department of Science and Technology in the Philippines, and formerly a specially-appointed assistant professor at the National Institute of Technology, Akashi College in Japan. He received his Ph.D in Quantum Engineering Design at Osaka University under the supervision of Prof. Hideaki Kasai. His research has focused on first principles calculations for heterogenous catalysis.