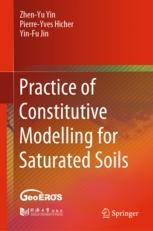 This book describes the development of a constitutive modeling platform for soil testing, which is one of the key components in geomechanics and geotechnics. It discusses the fundamentals of the constitutive modeling of soils and illustrates the use of these models to simulate various laboratory tests. To help readers understand the fundamentals and modeling of soil behaviors, it first introduces the general stress–strain relationship of soils and the principles and modeling approaches of various laboratory tests, before examining the ideas and formulations of constitutive models of soils. Moving on to the application of constitutive models, it presents a modeling platform with a practical, simple interface, which includes various kinds of tests and constitutive models ranging from clay to sand, that is used for simulating most kinds of laboratory tests. The book is intended for undergraduate and graduate-level teaching in soil mechanics and geotechnical engineering and other related engineering specialties. Thanks to the inclusion of real-world applications, it is also of use to industry practitioners, opening the door to advanced courses on modeling within the industrial engineering and operations research fields.

Zhen-Yu Yin is an Associate Professor of Geotechnical Engineering at The Hong Kong Polytechnic University since 2018. Dr. Yin received his BSc in Civil Engineering from Zhejiang University in 1997, followed by a 5 years engineering consultancy at the Zhejiang Jiahua Architecture Design Institute. Then, he obtained his MSc and Ph.D. in Geotechnical Engineering at Ecole Centrale de Nantes (France) in 2003 and 2006 respectively. Then he has been working as postdoctoral researcher at Helsinki University of Technology (Finland), University of Strathclyde (Glasgow, UK), Ecole Centrale de Nantes and the University of Massachusetts (Umass-Amherst, USA). In 2010 he joined Shanghai Jiao Tong University as Special Researcher and received the honor of the “Professor of Exceptional Rank of Shanghai Dong-Fang(the Eastern) Scholar". In 2013, he joined Ecole Centrale de Nantes as an Associate Professor before moving to Hong Kong. Dr. Yin has published over 100 articles in peer-reviewed journals. He has been a member of the granular materials committee of American Society of Civil Engineers since 2012.

Pierre-Yves Hicher is professor at Ecole Centrale de Nantes with exceptional class of the highest academic honors in France. Prof. Hicher received his PhD in Engineering of Ecole Centrale de Paris in 1979 and received the PhD in physical sciences from University of Pierre & Marie Curie, Paris VI, in 1985. Prof. Hicher served as scientific consultant at the Ministry in charge of Research (1990-1993), researcher at the Laboratory of Mechanics CNRS (1993-1995), the director of the Civil Engineering Laboratory of Nantes-Saint-Nazaire (1995-2003), the director of the Research Institute in Civil and Mechanical Engineering UMR CNRS (2004-2007), the director of the Regional Research Institute in Civil Engineering and Construction GIS LiRGeC (2011-2015).

Professor Hicher's research involves many contemporary geotechnical frontiers, such as soil particle size effects, micromechanics of granular materials, cyclic loading effect, and time effect. He has published more than 100 papers in international journals and several books in his research field.

Yin-Fu Jin received his bachelor's degree in civil engineering from the Northwest A&F University in 2011 and received his Ph.D. degree in geotechnical engineering from Ecole Centrale de Nantes at France in 2016. He is mainly interested in soil mechanics and parameter identification. He has published more than 10 peer-reviewed papers in international journals such as Acta Geotechnica, International Journal for Numerical and Analytical Methods in Geomechanics, Ocean Engineering and Engineering Geology.