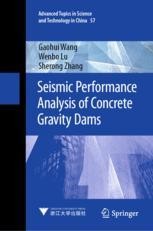 This book provides a theoretical basis for the seismic performance evaluation of high dams, and can also be used as a reference resource for researchers and graduate students engaged in the seismic design of high dams.

Dr. Gaohui Wang (1986–) is an Associate Professor of Wuhan University, whose primary research involves studying the seismic safety evaluation and antiknock assessment of high concrete dams. Now, he is undertaking two research projects supported by the National Natural Science Foundation of China (NSFC) and China Postdoctoral Science Foundation, respectively, and participating in the NSFC programs, the Tianjin Research Program of Application Foundation and Advanced Technology and the Open Foundation of SKL. He has also taken part in a number of transverse projects of hydro-engineering project including Guandi, Jinping Huangdeng, and so on. Up to now, Dr. Wang has published more than 90 academic papers. Among them, 45 and 39 papers are tagged by SCI and EI, respectively. He also won the Scholarship Award for Excellent Doctoral Student granted by the Ministry of Education in 2012.

Wenbo Lu (1968–) is currently a Professor of Wuhan University and has actively worked in the area of blasting and rock dynamics, water conservancy, and hydropower project construction technology. He is a chang-jiang scholar and received Distinguished Young Scholar funds of NSFC. Lu is a current member of engineering blasting professional committee of Chinese Society of Theoretical and Applied Mechanics and rock dynamics committee of Chinese Society for Rock Mechanics and Engineering, a member of engineering blasting professional committee of Chinese Hydraulic Engineering Society, the executive director of China Society of Engineering Blasting committee, and a vice president of engineering blasting committee of Hubei province. His research is sponsored by a variety of resources, such as the Major State Basic Research Development Program of China (973 Program), the Key Program of the National Natural Science Foundation of China, and the Technology and Industry for National Defense of China. Lu has over 100 publications on top-tier journals and internationally recognized conference proceedings. He has filed 40 patents, and 30 of them have been authorized. He has received the Second-Grade Awards of National Science and Technology Progress of China for three times and 2 First-Grade Awards of Science and Technology Progress from ministry and province.

Sherong Zhang (1960–) is currently a Professor of Tianjin University and has actively worked in the area of safety evaluation of hydropower projects in the whole life cycle and the anti-seismic and anti-explosion protection of hydraulic structures. He is an expert with outstanding contributions in Tianjin. Zhang is also the leader of water conservancy major in colleges and universities. He is a member of the board of directors of the Chinese higher education society, vice chairman of the laboratory management branch of the Chinese higher education society, member of the structural reliability committee of the bridge and structure engineering branch of the Chinese civil engineering society, and vice chairman of the Tianjin hydropower society. He has conducted and is conducting about 10 research projects such as the National Natural Science Foundation of China as project principal or main researcher. Zhang has published 100 papers in leading journals, which have been tagged 60 times by SCI/EI. Dr. Zhang is the author or co-author of 5 books. He has received the Second-Grade Awards of National Science and Technology Progress of China for four times and once Top-Grade and seven times First-Grade Awards of Science and Technology Progress from ministry and province.