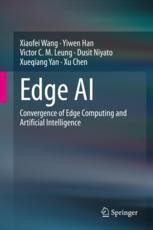 As an important enabler for changing people’s lives, advances in artiﬁcial intelligence (AI)-based applications and services are on the rise, despite being hindered by efﬁciency and latency issues. By focusing on deep learning as the most representative technique of AI, this book provides a comprehensive overview of how AI services are being applied to the network edge near the data sources, and demonstrates how AI and edge computing can be mutually beneficial. To do so, it introduces and discusses: 1) edge intelligence and intelligent edge; and 2) their implementation methods and enabling technologies, namely AI training and inference in the customized edge computing framework. Gathering essential information previously scattered across the communication, networking, and AI areas, the book can help readers to understand the connections between key enabling technologies, e.g. a) AI applications in edge; b) AI inference in edge; c) AI training for edge; d) edge computing for AI; and e) using AI to optimize edge. After identifying these five aspects, which are essential for the fusion of edge computing and AI, it discusses current challenges and outlines future trends in achieving more pervasive and fine-grained intelligence with the aid of edge computing.

Xiaofei Wang is currently a Professor with the Tianjin Key Laboratory of Advanced Networking, School of Computer Science and Technology, Tianjin University, China. He got Master and Doctor Degrees in Seoul National University from 2006 to 2013, and was a Post-Doctoral Fellow with The University of British Columbia from 2014 to 2016. Focusing on the research of social-aware cloud computing, cooperative cell caching, and mobile traffic offloading, he has authored over 100 technical papers in the IEEE JSAC, the IEEE TWC, the IEEE WIRELESS COMMUNICATIONS, the IEEE COMMUNICATIONS, the IEEE TMM, the IEEE INFOCOM, and the IEEE SECON. He was a recipient of the National Thousand Talents Plan (Youth) of China. He received the “Scholarship for Excellent Foreign Students in IT Field” by NIPA of South Korea from 2008 to 2011, the “Global Outstanding Chinese Ph.D. Student Award” by the Ministry of Education of China in 2012, and the Peiyang Scholar from Tianjin University. In 2017, he received the “Fred W. Ellersick Prize” from the IEEE Communication Society.

Mr. Yiwen Han received his B.S. degree from Nanchang University, China, and M.S. degree from Tianjin University, China, in 2015 and 2018, respectively, both in communication engineering. He received the Outstanding B.S. Graduates in 2015 and M.S. National Scholarship of China in 2016. He is currently pursuing the Ph.D. degree in computer science at Tianjin University. His current research interests include edge computing, reinforcement learning, and deep learning.

Prof. Victor C. M. Leung is a Distinguished Professor of Computer Science and Software Engineering at Shenzhen University. He was a Professor of Electrical and Computer Engineering and holder of the TELUS Mobility Research Chair at the University of British Columbia (UBC) when he retired from UBC in 2018 and became a Professor Emeritus. His research is in the broad areas of wireless networks and mobile systems. He has co-authored more than 1300 journal/conference papers and book chapters. Dr. Leung is serving on the editorial boards of the IEEE Transactions on Green Communications and Networking, IEEE Transactions on Cloud Computing, IEEE Access, IEEE Network, and several other journals. He received the IEEE Vancouver Section Centennial Award, 2011 UBC Killam Research Prize, 2017 Canadian Award for Telecommunications Research, and 2018 IEEE TCGCC Distinguished Technical Achievement Recognition Award. He co-authored papers that won the 2017 IEEE ComSoc Fred W. Ellersick Prize, 2017 IEEE Systems Journal Best Paper Award, 2018 IEEE CSIM Best Journal Paper Award, and 2019 IEEE TCGCC Best Journal Paper Award. He is a Fellow of IEEE, the Royal Society of Canada, Canadian Academy of Engineering, and Engineering Institute of Canada. He is named in the current Clarivate Analytics list of “Highly Cited Researchers”.

Prof. Dusit Niyato is currently a Professor in the School of Computer Science and Engineering, at Nanyang Technological University, Singapore. He was a Distinguished Lecturer of the IEEE Communications Society for 2016-2017. He was named the 2017, 2018 highly cited researcher in computer science. He is a Fellow of IEEE. His research interests are in the area of Internet of Things (IoT) and network resource pricing.

Xueqiang Yan is currently a technology expert with Wireless Technology Lab at Huawei Technologies. He was a member of technical staff of Bell Labs from 2000 to 2004. From 2004 to 2016 he was a director of Strategy Department of Alcatel-Lucent Shanghai Bell. His current research interests include wireless networking, Internet of Things, edge AI, future mobile network architecture, network convergence and evolution.