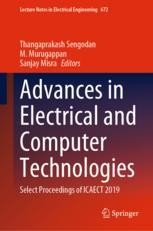 Advances in Electrical and Computer Technologies

Dr. Thangaprakash Sengodan received his Bachelor of Engineering in Electrical Engineering from Bharathiar University, India and Master of Engineering in Power Electronics and Drives in from Anna University, Chennai, during 2002 and 2014, respectively. He completed his Ph.D. degree in Electrical Engineering from Anna University, Chennai, India in 2011. From 2004 to mid-2011, he was working with various engineering colleges in India in different capacities. From mid-2011 to mid-2013, he was working as a Senior Lecturer in the School of Electrical Systems Engineering, University Malaysia Perlis (UniMAP), Malaysia. From mid-2013 he has been affiliated with the Department of Electrical and Electronics Engineering as a professor and head. His current research interests include power electronics circuits, renewable power conversion systems and solid state control of electrical drives. He has authored more than thirty papers in peer-reviewed international journals and conferences. Dr. Thangaprakash is a senior member of IEEE, IEEE-Power Electronics Society, IEEE-Communications Society and a life member of the Indian Society for Technical Education (ISTE). He is an editorial board member for the International Journal of Engineering, Science and Technology, Nigeria and a reviewer for the International Journal of Automation and Computing (Springer), IEEE Transactions on Power electronics, IEEE Transactions on Industrial Electronics, IET Power Electronics and various IEEE/Springer/Elsevier sponsored international/national conferences. Dr. Thangaprakash had been an organizing chair for four IEEE International Conferences: 2012 Second IEEE International Conference on Computer, Communication and Informatics (2012 IEEE ICCCI) and 2015, 2017 and 2019 editions of the IEEE International Conference on Electrical, Computer and Communication Technologies (IEEE ICECCT).

Dr. M Murugappan received the B.E (Electrical & Electronics Engineering) from Madras University, India, M.E (Applied Electronics) from Anna University, India and Ph.D. (Mechatronic Engineering) from Universiti Malaysia Perlis, Malaysia, 2002, 2006 and 2010, respectively. He is currently working as an associate professor in Department of Electronics and Communication Engineering, Kuwait College of Science and Technology (KCST) (Private University), Kuwait since Feb 2016. Prior joining to KCST, he worked as a Senior Lecturer in School of Mechatronics Engineering, University Malaysia Perlis, Malaysia from 2010-2016. He has been working in the fields of bio-signal processing applications for the past 8 years and, has been cited as an expert in WHO IS WHO in the world. He has received a several research awards, medals and certificates on excellent publications and research products. He has published more than 110 research articles in a peer-reviewed conference proceedings/ journals/book chapter. Some of his research articles won special award from the international journals and conferences. He has got a maximum citation of 1925 and scored the H index of 22 and i10 Index of 40 (Ref: Google Scholar citations). He secured several research grants from Government of Malaysia for continuing his research works and supervised nearly 11 postgraduate students (7 Ph.D and 4 M.Sc). He is also serving as Editorial board member in several internationally peer-reviewed journals (ISI) and committee members in international conferences. His main research interest are bio-signal/image processing applications (affective computing), neuroscience, brain computer interface, human machine interaction, and vision system.

Dr. Sanjay Misra is Professor of Computer Engineering at Covenant University, Ota, Nigeria. He has 25 years of wide experience in academic administration and researches in various universities in Asia, Europe and Africa. He obtained his Ph.D. in Information and Know. Engg (Software Engineering) from University of Alcala, Spain and M.Tech. (Software Engineering) from Motilal Nehru National Institute of Technology, India. He has authored/coauthored around 300 papers. He got several awards for outstanding publications such as Institute of Engineering and Technology(IET), United Kingdom, awarded him ‘2014 IET Software Premium Award’  for Best Paper published in last two years. He has delivered 41 plenary and keynote speeches (IEEE, Springer, Elsevier sponsored conferences) and 40 invited talks (workshops/seminars/lecture) in various universities and institutions around the world (travelled around 60 Countries). He is editor in chief of the book series on Advances in IT Personals and Project management (IGI Global), author of 1 book and editor (one of) in 31 Lecture Notes in Computer Science (Springer), 6 IEEE conference proceedings. He was the General Chair of many international conferences. Presently, Dr. Sanjay is Editor-in-Chief of International Journal of Physical Sciences (SCOPUS Indexed), founder EIC of Covenant Journal of ICT and International Journal of Computer Science and Software Technology, and also serving as editor, associate editor and editorial board members of more than 20 journals (Including 3 SCIE) of international repute. His current researches cover the areas of software quality assurance, software process improvement, software project management, object oriented technologies, XML, SOA, Web services, cognitive informatics, artificial intelligence, neural network, health Informatics, e-learning, cloud computing and cyber security.