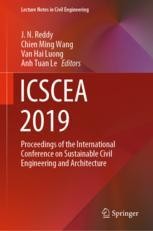 Proceedings of the International Conference on Sustainable Civil Engineering and Architecture

This book presents papers from the International Conference on Sustainable Civil Engineering and Architecture 2019, which was held in Ho Chi Minh City, Vietnam, from 24–26 October 2019. The conference brought together international experts from both academia and industry to share their knowledge and experiences, and to facilitate collaboration and improve cooperation in the field. The book highlights the latest advances in sustainable architecture and civil engineering, covering topics such as offshore structures, structural engineering, construction materials, and architecture.