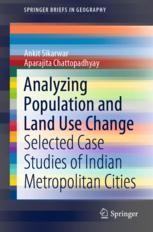 Analyzing Population and Land Use Change

This multidisciplinary book discusses and scientifically analyzes issues related to population, land use/cover (LULC) and environmental transformations in the seven most populated cities in India: Delhi, Mumbai, Kolkata, Bangalore, Chennai, Hyderabad and Ahmedabad. To do so, it closely examines and compares the trends in selected population parameters, including total population, total number of households, population density, population growth rate, percent of total population in slums and intercensal net migration over the past two decades. Presenting the changes in various LULC categories (built-up land, forest cover, agricultural land, fallow land and water bodies) using the supervised classification of Landsat TM-5 images, it assesses the impact of population and LULC on the maximum and minimum temperatures and average annual rainfall in these regions. The book is a valuable resource for researchers and academics in the areas of sustainability, population and development, and environmental studies as well as those in NGOs and humanitarian sectors working in the areas of sustainable development and environment.

Ankit Sikarwar is a senior research fellow at the International Institute for Population Sciences in Mumbai, India. His work mainly focuses on land alterations and urban issues in cities, and their links with population dynamics, as well as their impact on the environment. Prior to his Ph.D., Ankit analyzed urban land use changes in Indian cities during his M.Phil. and Master of Population Studies courses. He also holds an M.Sc. in Geography from the Maharaja Sayajirao University of Baroda in India. He has completed short training courses run by the Indian Space Research Organization (ISRO), Ahmedabad, and the Geo-informatics and Space Technology Development Agency of Thailand (GISTDA). He has presented his research on population and land dynamics at various national and international conferences, such as the Population Association of America Conference, 2017, Chicago, USA; Asian Population Association Conference, 2018, Shanghai, China; and Open Science Meeting 2019, Bern, Switzerland.
Aparajita Chattopadhyay is has been a faculty member at the International Institute for Population Sciences and the Banaras Hindu University for almost two decades. She has been involved in a number of well-known research projects and publications, and she has received various awards and grants for demographic and population-related research from respected universities and organizations like the University of Calcutta, International Institute for Population Sciences, Indian Association for the Study of Population, University of Karachi, in India, and the University of Harvard, and RAND corporation in the USA. Her areas of interest include gender issues, environment and development, and nutrition and aging.