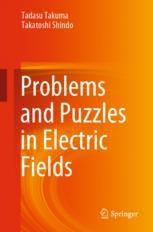 Problems and Puzzles in Electric Fields

This book aims at making readers develop a better understanding of electrostatic fields using the form of problems and puzzles (summarized as “questions” hereafter) and answers, instead of tedious explanations in ordinary textbooks. The book is filled with the questions with unexpected answers and questions often misunderstood or rarely completely understood, most of which are original. The questions in the book look simple and very easy to answer at a glance; nevertheless, once students try to solve them, they will find that the questions are really tough nuts to crack. Teachers can also use the questions in the book in their classes.
Not only from an academic or an educational point of view, the book is useful also to engineers working in such fields as electrical discharges and their applications, high voltage equipment in DC and AC circuits as well as electrostatic devices. This is because the book introduces various practical applications related to electrostatic fields.
The original ideas of the book are based on the following Japanese book written by one of author; T. Takuma: Panorama of Electric Fields (in Japanese) IEE, Japan, 2003. This English version of the book has been thoroughly revised and improved with several new questions added.

Tadasu Takuma was born in Mie prefecture, Japan, on 30 September 1938. He received the B.S., M.S., and Ph.D. degrees in electrical engineering from the University of Tokyo in 1961, 1963, and 1966, respectively. He worked for the Central Research Institute of Electric Power Industry (CRIEPI) from 1967.to 1995 as a Professor in the Department of Electrical Engineering, Kyoto University from 1995 to 2002 and as a Professor at the Tokyo Denki University from 2004 to 2009. He stayed in Technical University Braunschweig, Germany, from 1973 to 1975. He has been engaged mainly in the study of SF6 gas insulation, gas discharges, environmental problems of transmission lines, numerical field calculation. He is an author of “Electric Fields in Composite Dielectrics and their Applications” (Springer, 2010) and an author/editor of about ten Japanese books.Dr. Takuma received the Maxwell Premium from the Institution of Electrical Engineers, Great Britain in 1974, and three times the book prize from the IEE (the Institute of Electrical Engineers), Japan in 1981, 1991 and 2011, and Commendation from the Minister of State for Science and Technology, Japan in 1992. He is a Fellow of IEEE.
Takatoshi Shindo  was born in Tokyo, Japan on November 21, 1953. He received the B. S. degree and M. E. degree in electrical engineering and Ph. D. degree in engineering from the University of Tokyo, Tokyo, Japan in 1976, 1978, and 1992, respectively. He joined the Central Research Institute of Electric Power Industry(CRIEPI),Tokyo, Japan, in 1978. He has been engaged in the study of external insulation of power apparatus, particularly with regard to lightning protection, physics of discharge in long air gaps. From 1987 to 1988, he was a Research Associate in the Department of Electrical Engineering, University of Florida. He is now a Research Advisor Emeritus of CRIEPI. Dr. Shindo is a Fellow of the Institute of Electrical Engineers of Japan and a Fellow of IEEE.