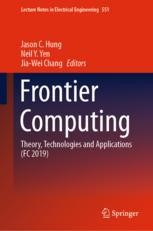 This book gathers the proceedings of the 9th International Conference on Frontier Computing, held in Kyushu, Japan on July 9–12, 2019, and provides comprehensive coverage of the latest advances and trends in information technology, science and engineering. It addresses a number of broad themes, including communication networks, business intelligence and knowledge management, web intelligence, and related fields that inspire the development of information technology. The respective contributions cover a wide range of topics: database and data mining, networking and communications, web and internet of things, embedded systems, soft computing, social network analysis, security and privacy, optical communication, and ubiquitous/pervasive computing. Many of the papers outline promising future research directions, and the book will benefit students, researchers and professionals alike. Further, it offers a useful reference guide for newcomers to the field.

Dr. Jason C. Hung is an Associate Professor of Department of Computer Science and Information Engineering at National Taichung University of Science and Technology, Taiwan, ROC. His research interests include Multimedia Computing and Networking, e- Learning, Web Service and Anticipatory Computing. Dr. Hung received his BS and MS degrees in Computer Science and Information Engineering from Tamkang University, in 1996 and 1998, respectively. He also received his Ph.D. in Computer Science and Information Engineering from Tamkang University in 2001. Dr. Hung has published over 140 papers and book chapters, as well as participated in many international academic activities, including the organization of many international conferences. He is the founder of International Conference on Frontier Computing. In 2013, He served as Hon Treasurer of IET Taipei LN. In April of 2014, he was elected as Fellow of the Institution of Engineering and Technology (FIET). He was elected as vice chair of IET Taipei LN in Nov. 2014. From June 2015, He is Editor-in-Chief of International Journal of Cognitive Performance Support.

Dr. Neil Y. Yen is an Associate Professor at the University of Aizu, Japan. Dr. Yen received doctorates in Human Sciences (major in Human Informatics) at Waseda University, Japan, and in Engineering (major in Computer Science) at Tamkang University, Taiwan in March and June 2012 respectively. His doctor degree at Waseda University was funded by the JSPS (Japan Society for the Promotion of Science) under RONPAKU program. Dr. Yen has actively involved himself in the international activities, including editorial works in journals and books, society services in academic conferences sponsored by IEEE/ACM, etc., and devoted himself to discover advanced and interesting research directions. Dr. Yen has been engaged in the interdisciplinary realms of research, and his research interests are now primarily in the scope of human-centered computing and big data.

Dr. Jia-Wei Chang is an Assistant Professor of Department of Computer Science and Information Engineering at National Taichung University of Science and Technology, Taiwan, ROC. During February to July 2018, he was an adjunct assistant professor in Department of Engineering Science at National Cheng Kung University. He was a data scientist and project manager at IoT BU, Nexcom during 2016-2017. He received the Ph.D. degree from Department of Engineering Science, National Cheng Kung University in 2017. His research interests include natural language processing, internet of things, artificial intelligence, data mining, and e-learning technologies.