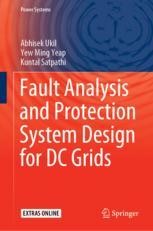 This book offers a comprehensive reference guide to the important topics of fault analysis and protection system design for DC grids, at various voltage levels and for a range of applications. It bridges a much-needed research gap to enable wide-scale implementation of energy-efficient DC grids. Following an introduction, DC grid architecture is presented, covering the devices, operation and control methods. In turn, analytical methods for DC fault analysis are presented for different types of faults, followed by separate chapters on various DC fault identification methods, using time, frequency and time-frequency domain analyses of the DC current and voltage signals. The unit and non-unit protection strategies are discussed in detail, while a dedicated chapter addresses DC fault isolation devices. Step-by-step guidelines are provided for building hardware-based experimental test setups, as well as methods for validating the various algorithms. The book also features several application-driven case studies.

Abhisek Ukil received his B.Eng. degree in Electrical Engineering from Jadavpur University, Kolkata, India, in 2000, and his M.S. degree from the University of Bolton, UK, in 2004. He completed his Ph.D. degree at Pretoria (Tshwane) University of Technology, South Africa, where he worked on automated disturbance analysis in power systems, in 2006. Currently, he is an Associate Professor at the Department of Electrical, Computer and Software Engineering, University of Auckland, New Zealand. From 2013–2017, he was an Assistant Professor at the School of EEE, Nanyang Technological University, Singapore. From 2006–2013, he was Principal Scientist at the ABB Corporate Research Center, Baden-Daettwil, Switzerland. He holds 11 patents and is the author of more than 180 peer-reviewed papers, a monograph, and two book chapters. He is a Senior Member of the IEEE (USA) and a Registered Chartered Engineer (C.Eng.), UK. He is an Associate Editor of IEEE Transactions on Industrial Informatics and Electrical Engineering, published by Springer. His research interests include smart grids, DC grids, energy efficiency, renewable energy, energy storage, and condition monitoring.

Yeap Yew Ming received his B.Eng. degree in Electrical Engineering from the University of Malaya, Kuala Lumpur, Malaysia, in 2013. He received his Ph.D. degree from Nanyang Technological University, Singapore, where he worked on fault detection in High-Voltage Direct Current (HVDC) systems, in 2018. Currently, he is a Scientist at the Institute for Infocomm Research (I2R), Singapore, and is leading an industry project on EV as Co-Principal Investigator. He is the author of more than 20 peer-reviewed papers, and a reviewer for the journals IEEE Transactions on Industrial Electronics and Industrial Informatics. His research interests include smart grids, DC grids, power electronics & control, and energy storage for EV.

Kuntal Satpathi received his B.Tech. degree in Electrical Engineering from the Haldia Institute of Technology, India, in 2011. He received his Ph.D. degree from Nanyang Technological University, Singapore, where he worked on the operation and fault management of DC marine power systems, in 2019. From 2011–2014, he was with Jindal Power Limited, Raigarh, India, specializing in thermal power plant operations. Currently, he is a Research Fellow at Nanyang Technological University, Singapore. He is the author of nearly 20 peer-reviewed papers. His research interests include the modeling, control and protection of AC/DC grids.