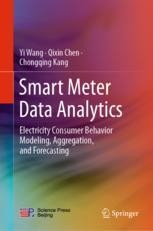 This book aims to make the best use of fine-grained smart meter data to process and translate them into actual information and incorporated into consumer behavior modeling and distribution system operations. It begins with an overview of recent developments in smart meter data analytics. Since data management is the basis of further smart meter data analytics and its applications, three issues on data management, i.e., data compression, anomaly detection, and data generation, are subsequently studied. The following works try to model complex consumer behavior. Specific works include load profiling, pattern recognition, personalized price design, socio-demographic information identification, and household behavior coding. On this basis, the book extends consumer behavior in spatial and temporal scale. Works such as consumer aggregation, individual load forecasting, and aggregated load forecasting are introduced. We hope this book can inspire readers to define new problems, apply novel methods, and obtain interesting results with massive smart meter data or even other monitoring data in the power systems.

Yi Wang is a Postdoctoral Researcher at ETH Zurich. He received his Bachelor's degree in electrical engineering from Huazhong University of Science and Technology (HUST) in 2014 and a Ph.D. degree in electrical engineering at Tsinghua University in 2019. From 2017 to 2018, he was an exchange student researcher at University of Washington. His research interests include big data applications in the smart grid, multiple energy systems, and cyber-physical power distribution systems. He currently serves as the secretary of IEEE PES Working Group on Energy Forecasting and Analytics. He is the reviewer of over 20 journals and has been awarded as best reviewer of IEEE Transactions several times. He also serves as the associate editor for IET Renewable Power Generation, IET Smart Grid, and International Transactions on Electrical Energy Systems. He was awarded as excellent graduate student of Tsinghua University and Siebel Scholar.

Qixin Chen is an Associate Professor at Tsinghua University. He is also an Associate Director for Energy Internet Research Institute, Tsinghua University. He received both the B.S. and Ph.D. degrees from the Department of Electrical Engineering, Tsinghua University in 2005 and 2010, respectively. He had ever worked as a Research Assistant in School of Electrical and Electronic Engineering at the University of Manchester, United Kingdom in 2008. His research interests include power market, low carbon electricity technology, data analytics for smart grid. He is an IEEE Senior Member. He is the Chair of IEEE Working Group on Load Aggregation and Distribution Market. He was granted the National Science Fund for Distinguished Young Scholars by NSFC and the Research Fund for Distinguished Young Scholars by the Fok Ying-Tong Education Foundation. He was recognized by Prosper.net-Scopus as part of its Young Scientist Award in 2011. He was a winner of TR 35 in 2012 (The World’s Top 35 Young Innovator under the Age of 35) by MIT Technology Review. He was also granted the title of Global Young Scientist Honor (40 under the age of 40 annually) by the World Economic Forum in 2013, and he was invited to present in the Summer Davos Conference.

Chongqing Kang is a Professor and Dean of Department of Electrical Engineering in Tsinghua University. He received Bachelor's degrees of both Electrical Power Engineering and Environmental Engineering in 1993. He has been teaching at Tsinghua University since 1997 when he received Doctor's degrees of Electrical Power Engineering. He was a visiting scholar at University of Cambridge, UK from 2007 to 2008. His research interests include power system planning and operation, Energy Internet, renewable energy, low-carbon electricity, power system load forecasting and electric market. He is the IEEE Fellow and IET Fellow. He was awarded the National Science Fund for Distinguished Young Scholars, the Leading Talents in Scientific and Technological Innovation of the "Ten Thousands Talents Plan", New Century Excellent Investigator in Universities, and selected for the Program of the Fok Ying-Tong Education Foundation. He serves as Editor-in-Chief of International Transactions on Electrical Energy Systems.